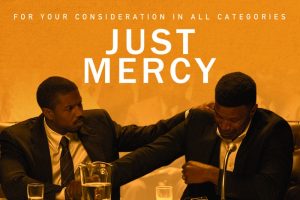 Michael B. Jordan stars as Bryan Stevenson in a true story as a determined Alabama lawyer that decides to defend death row prisoners. The year is 1987, and Walter McMillian (Jamie Fox) is sentenced to die for the murder of an 18-year-old girl, despite a majority of evidence proving his innocence. The only testimony against him comes from a criminal with a motive to lie.

The director is Destin Daniel Cretton.

This is a tough film to watch due to the injustices that are at the core, although the courage and heroism displayed by Bryan Stevenson shine brightly.

Brie Larson and Raff Spall also co-star. What we discover is that Stevenson isn’t just fighting a single case, he’s taken on the deep south’s history and attitude of racial domination.

An excellent screenplay and strong cast!