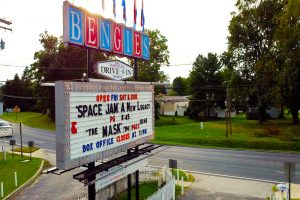 Director and writer April Wright created another outstanding documentary follow-up film to her historical movie, “Going Attractions: The Definitive Story of the American Drive-in Movie” (2013). The new drive-in movie focuses on America’s newfound love for drive-ins during the pandemic and their demise a few years later. The two films are different in structure —’ Going Attractions’ focused on the history of drive-ins, including the genre of film selection, the locations, the neighborhood problems, and their closures. “Back to the Drive-in” chronicles an up close and personal look at a part of Americana that is slowly dying again and the people trying to prevent the movie experience from dying out. Here’s the good news, after watching her latest film, you’ll want to go to a drive-in movie to create a memorable outdoor viewing experience under the stars.

Wright’s films are thoroughly researched here, she explains the owner’s dilemmas—the evening hours, the upkeep, the rising operating costs, the family joys and difficulties of working with family, the heartfelt emotions of the owner’s obligation to keep the drive-in business alive, as they are the last warriors of a dying industry. The up-close and personal narratives are powerful as one can clearly see the owner’s struggles and incite feelings of empathy for their plight. Her verité technique of filming is powerful in demonstrating the candid realism of her subjects. In the case of drive-ins, it’s a call to action—support your local drive-in, or they will be gone like so many in our country.

Attending a drive-in owners conference in February 2020 was the key to gathering information for her new film. Wright was able to plan her filming trip across America, visiting 11 drive-ins in eight states. She toggles back and forth between them as each story unfolds. There’s a newly built one included and a few that had been around since the 1950s. They varied with screen options, some had only one, and some had several. The hard work, devotion, and passion for keeping the business going are apparent and similar to all.

On a personal note, I miss our Chicago suburban drive-in; it was only 20 minutes from my home. When I visit friends in other cities, I try to attend the drive-in near their homes if possible. I’ve had memorable experiences with friends and families at their local drive-in. I love the fact that Brad Pitt mentioned his memories of growing up and attending drive-ins during his Oscar acceptance speech in 2021.

Drive-ins are a part of Americana that is sadly fading away—Wright’s film is a call to action and a love letter to drive-ins, which is a win-win for people supporting the cause as you will also come away with incredible movie viewing memories.