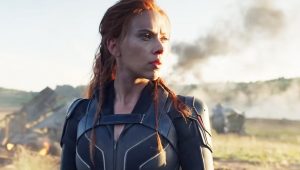 There’s no denying that Natasha Romanoff, aka Black Widow (Scarlet Johansson) character’s past, is mysterious—now we are privy to her former life as well as the revenge that motivates her. Black Widow’s intrigue is blown full open, as we not only view the harsh Soviet’s “Red Room” transformation and brain-washing techniques of grooming girls to become ‘killing machines—we view her fake family moments living undercover in Ohio, 1995.

English actress Florence Pugh (Yelena Bolova), new to the series, is cast as Natasha’s fake sister; although growing up together, the duo thought they were indeed biological sisters. The sisters were both trained in the Black Widow program and did try to out-muscle each other at times. Their mother is Rachel Weisz, and their father is the breakout star from “Stranger Things,” David Harbor, and yes, they are Russian spies. 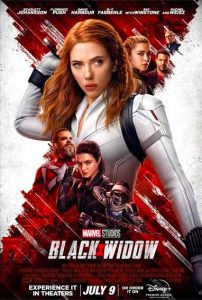 What separates the excellent character-driven “Black Widow” from the rest of the Marvel movies is the dynamic of the false undercover family experience and its lasting effects on the siblings’ younger emotional development. You’ve got a pretty incredible back story that sets the stage for future endeavors when you mix that with the teen intense’ Red Room’ training. “Black Widow” excellent script is developed to the point that we really do care for the so-called sisters and their families. Accolades to the filmmakers in focusing on this angle. I’m so entrenched now the next film can’t come soon enough.

To refresh or give newcomers to the series the timeline, the events in Marvel’s “Black Widow” take place between “Captain America Civil War” and “Infinity War.” Iron Man and Captain America’s fallout from their warfare has caused Natasha to live off the grid in Europe as a fugitive from General Ross (William Hurt) when she’s forced to confront her past as a Russian spy. Natasha sees plenty of action as she’s being hunted, similar to the Jason Bourne hand-to-hand combat. The fight scenes are choreographed to perfection, with the actors hitting their marks and shocking us with their finesse and precision.

Director Cate Shortland has taken care to simulate Natasha’s moniker moves that can be traced back to her training as a Russian Widow. The non-super human fighting action creates high-energy action along with humorous situations. I found the scenes refreshing and powerful. The sisterly tension between Natasha and Yelena is definitely at the heart of the movie—it’s a consistent theme woven throughout to tell their family story.

My complaint is that this movie should have been made at least ten years ago. It’s very sad to watch a film when you know the character has already been killed off. Stay for the bittersweet credits as the next Black Widow movie will focus on Yelena and her future. I hope the writers continue the duo’s story as together they are dynamite.