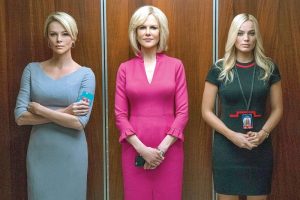 “Bombshell” by Lionsgate is based on the real events of the 2016 scandal at Fox News television station that lead to the downfall of the creator Roger Ailes.

Director Jay Roach works with a traditional screenplay obtaining stellar performances from several of his high-profile stars. Acting is the reason to see “Bombshell,” starting with Charlize Theron. She shockingly captured the appearance (you’ll shake your head when you see her resemblance to Megan Kelly). Nicole Kidman and John Lithgow are equally strong in supporting roles. Margot Robbie has the advantage of playing a fictional character, allowing leeway in presenting Kayla as an amalgamated view.

Bombshell is an important film that tells the story of women who were demoted or promoted in their careers’ depending upon their reactions to Roger Alies sexual advances. The film shows the abuse of power and the consequences. Roach has crafted a compelling “ripped from the headlines” film that evolves somewhat like a grabbing page-turner book.