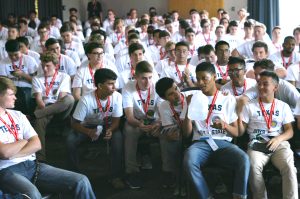 Hi Carl, tonight I’m going to talk about a film that won the US Grand Jury Prize at the Sundance Film Festival this year. It’s the documentary “Boy’s State.”

“Boy’s State,” is “a program for teenagers to learn about democracy through a week-long simulation in self-government.” The boys are divided into Federalists and Nationalists; they are instructed to come up with a party platform.

The film takes place in Austin, Texas, where more than 1,000 boys gathered in the summer of 2018 to create their own government. At the end of the week, a governor is elected.

The directors are the husband and wife team Amanda McBaine and Jesse Moss.

The Bottomline: I’m way in 3 and a half stars out of 4. To be honest, I did not know about this program.
American Legion Boys State is among the most respected and selective educational programs of government instruction for U.S. high school students. It started in 1935 by the ‘Illinois American Legion,” in Springfield, Illinois. Other states in the United States also have the same week-long camp.

The filmmakers gave us an outstanding bird’s eye view of watching this process, by following four boys, each with very different personalities and backgrounds. The film provides hope in our government for the future.

All and all, an entertaining film is streaming on Apple TV+ and theaters beginning this weekend.