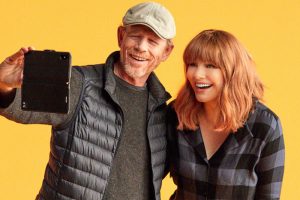 Happy Father’s Day weekend! First up “Dads,” it’s a comedy and documentary film centered on dads by director Bryce Dallas Howard, Ron Howard’s daughter. The film premiered in Toronto in 2019. I was able to attend the opening and interview Ron Howard and his daughter Bryce on the Red Carpet before the film.
Bryce wanted to celebrate not only being raised by a wonderful Dad, but also her loving and caring grandfather. Streaming now on AppleTV+.

It’s fair to Bryce Howard comes from Hollywood royalty, as she’s the star of the Jurassic World franchise, her father Ron Howard is an award-winning filmmaker and a child actor in the TV series “The Andy Griffin Show.” Interestingly enough, the film touches on Ron Howard’s dad, Rance Howard, who had a hand in changing the beginning relationship between sheriff Andy Griffin and his son Opie (Ron Howard). The writer’s initialing thought a smart-alec kid, similar to other sitcom kids, was the way to go. Ron Howard had other ideas. He asked the writers if they’d give Opie a chance to have a loving father and son relationship. The writer’s agreed, and the rest is history.

The famous dads share comical moments, although they are more on the serious, misty-eyed group. Ron Howard takes his dad job seriously as he tears up speaking about his own dad and his responsibility as a dad. As the dads are moved to tears— an important undying message is conveyed—it’s okay for dads to cry.

The Daddy-Video Bloggers look at the comical side of child-rearing as well as the serious side—the negotiating, the potty training, and general caring for the kids. One stay-at-home dad in Tokyo is featured who almost committed suicide when he learned that an illness would prevent him from being the primary breadwinner. A white same-sex couple adopted four African-American children over six months—we are shown their new life on a farm. The diversity of the dads is substantial; different styles of parenting from around the globe are highlighted—all with the common thread of love at the core.

The Bottom-Line: I’m all in four stars out of four, anecdotes, humor, and wisdom from Hollywood fathers, Will Smith, Jimmy Fallon, Kenan Thompson, and Jimmy Kimmel, along with others answer the question, “What does it mean to be a dad in today’s society?” 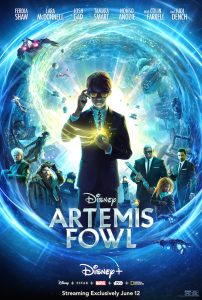 Next up: “Artemis Fowl.” It’s based on the 2001 fantasy novel by Eoin Colfer. The film stars Ferdia Shaw, Lara McDonnell, Josh Gad, Colin Farrell, and Judi Dench. The setting is Ireland, and 12-year-old Artemis Fowl is determined to rescue his father, who has been kidnapped. Artemis’s Dad is suspected of being a criminal mastermind. Artemis’ butler/bodyguard Dom reveals the true nature of his father’s work, and that there is a vast underground magical realm. He finds out that a good fairy who has gone bad kidnapped him. Artemis then teams up with a young 84-year-old fairy Holly (McDonnell), who wants to clear her own late father’s name.

Sound confusing? Unfortunately, director Kenneth Branagh creates more chaos in providing a visually dark and muddled palate. At times, it’s nearly impossible to ascertain who or what is in the frame. Scenes are viewed through Artemis’ and Holly’s eyes, as well as narrator Mulch (Gad), a thieving dwarf, and the short-fused fairy Commander Root (Dench). The result is overkill.

While all are looking for the Aculos, a solid magical object that will solve their problems, most of the film’s running time takes place during a military siege during which Root (Dench) deploys Mulch to break into Fowl Manor.
The Bottom-Line: I’m out 2 ½ stars out of four. The film is dark in tone, complicated, and very hard to follow. I did like all of the actors, and the books are fantastic! The action set-pieces feel both superfluous and overcomplicated with mythology and effects.

Check out the Radio Podcast on Hollywood 360 Radio Network: