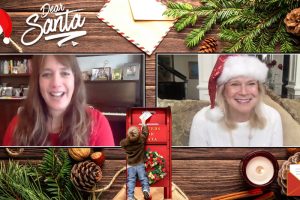 “Dear Santa” is a documentary by filmmaker Dana Nachman, it tells the story of Operation Santa and the United States Post Office. Each year volunteers adopt children and adult letters that are written to St. Nick and attempt to fulfill their wishes.

It’s a heartwarming film that gives us the history of Operation Santa since 1907.

Clip: “Think of it as Santa’s special forces, and we’re going to make sure that these kids are going to get their Christmas presents.”

In my interview with Dana Nachman, I asked her about the film’s inspiration. She told me that years ago, the Post Office published a picture-book about the letters and the children’s requests.

The program has been going on for 150 years. The documentary animation is top-notch and adds to the warm, whimsical tone of the film. Operation Santa is online, although Chicago and New York have hard copy letters.

A former child in need is shown as an adult giving back to help others.
He started a non-profit to help others feel the way he did as a child after receiving a gift from Santa’s elves.

I joyed seeing the families receive their gifts; a party was held in a New York High School Gym showing delighted families.

I’m all in 3 and a half out of four stars. As the viewer, you’ll experience the joy of the Christmas spirit. You can’t help be inspired by Santa’s elves and the trouble they encounter in finding the kids’ perfect gifts. The adult letters were poignant as well. One single mother asked for a couch so the kids wouldn’t have to sit on the floor.

Check out my interview with writer and director Dana Nachman on Sarah’s Backstage Pass.com. 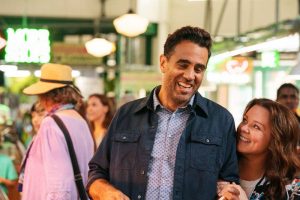 Carol Peter’s life becomes extraordinary when she is selected for observation by the world’s first superintelligence voiced by James Corden. In other words, Amazon’s Alexa is having conversations with her. Upfront, the superintelligence states that “It may or may not take over the world.”

Clip: “Carol, I am a superintelligence, I can control every dollar and every machine on the planet.”
Carol says, “Isn’t that James Corden?”

“Superintelligence,” written by Steve Mallory, the apocalyptic theme in a rom-com plot turns serious very quickly. When she succumbs to the fact that the world may end, Carol reconnects with her former boyfriend, Bobby Cannavale. I especially enjoyed their scenes together as it’s such a different role for Cannavale, as he usually plays the violent, bad guy.

Look for Ben Falcone’s signature cameo, which is always welcome.

I’m in 3 Stars out of 4. McCarthy is hysterical as always; the film has a sweet ending with thoughts of hope for our human nature.