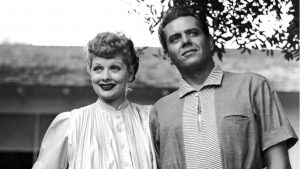 Here are two TV viewing options; the first is my favorite film of the Sundance Film Festival of the 20 movies I screened. It’s Amy Poehler’s excellent documentary film, “Lucy and Desi.” Lucille Ball’s daughter Lucie Arnaz’s personal insights are priceless in understanding the complexity of her parent’s marriage and love.

Amy Poehler posed a question asking, “How could we truly know the powerhouse couple’s dealings in Hollywood?” The answer is very clear in the film as she had access to the Luci and Desi estate, which provided videos, photos, and audio of Lucy and Desi talking about their lives in their own words. Poehler also wanted to give a picture of their relationship on an emotional level.

Luci says, “They didn’t want Desi to play my husband because then we wouldn’t be the ‘all American couple,’ Desi is Cuban, and that was a roadblock.” They kept repeating to the producers that they wanted to do the show together. Simply put, they wanted to work together. Sadly, their fame is what tore them apart.

The addition of Carol Burnett, a true friend, and admirer of Luci, is telling. Her recollections and observations of her mentor, Luci, are priceless. Other admirers also chime in as daughter Luci Arnaz, singer, and comedian Bette Midler, and TV writer and producer Norman Lear confirm the couple’s comedic genius.

Near the end, Lucie Arnaz gives commentary on her father’s last wishes; as she was his caregiver, she relates the phone conversation between her parents, which is very touching. Having Arnaz on board brings authenticity as well.

I’m way in four stars out of four; the structure of the film adds to its overall crisp look and feel with loads of new information about the famous couple; both were pioneers in the TV industry. It’s streaming now on Amazon Prime. 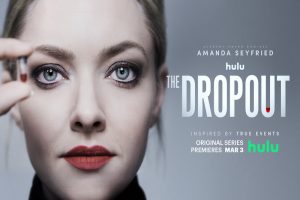 Next up, “The Dropout,” a series on Hulu; season one has eight episodes. It stars Amanda Seyfried as ‘Elizabeth Holmes’ in an award-worthy performance. She developed a healthcare technology that wasn’t tested thoroughly and put millions of patients at risk; she also swindled millions of dollars out of donors to fund her company. If you’ve seen the Alex Gibney documentary, you’ll have a good idea what this mini-series is all about.

Elizabeth Holmes, the billionaire fraudster whose startup company Theranos deceived investors for more than a decade, comes very close to giving us a look at what was going on in the mind of Holmes. Did she really think she was achieving a humanitarian product that would change the way we diagnose our health—or was she driven by the fact that she was a billionaire? I believe it’s still challenging to discern the two, although she leans toward the latter by all appearance.

Elizabeth Holmes is a dream role. She has so many idiosyncrasies, such as her fake deep voice, the daily green juice, black turtleneck, the Yoda references, and her intense nature when talking about Theranos. She reminded me of some of the gifted students I taught in the past that would perseverate on a topic and talk of nothing else. At times she seems like a broken record repeating the same message repeatedly, although as intelligent as she is, the delivery was typically a little altered in delivery. It’s not only her appearance that makes this a dream role; it’s also her mannerisms. Seyfried plays dramatic and comedic, serious and silly while channeling manic energy at times.

The stellar supporting cast includes Naveen Andrews as Holmes’s much older lover and business partner who also serves as the company’s muscle, Sunny Balwani. He’s riveting to watch, his motives are lust for Holmes, yet he knows she would leave him in second. All of the supporting cast garners strong and memorable performances; Michaela Watkins as Theranos’s lawyer, Dylan Minnette as whistleblower Tyler Schultz, the grandson of George Schultz portrayed by Sam Waterston, Laurie Metcalf as straightforward Phyllis Gardner, along with William H. Macy and Stephen Fry. The series directors Michael Showalter, Erica Watson, and Francesca Gregori pay close attention to drawing out not only the intenseness of the script but also mix in humor.

One covered aspect is the damage Holmes has done to other women hoping to borrow funds to start companies. Who is going to believe women now? With the double whammy of the deceit of funds and putting people’s health at risk, she did more bad than good for more than just the medical and tech communities; she made investors look foolish, while women aren’t to be trusted.

I’m way in, four stars out of four. This riveting series gives us an inside look into the mind of a power, money-hungry person who’s driven by fame and greed—great script and performances by all of the cast.

Thanks so much for listening in tonight; I’m Sarah Knight Adamson, your national film and tv critic for Sarah’s Backstage Pass.