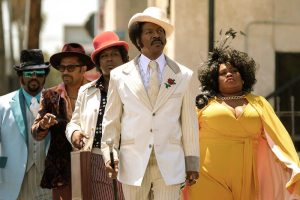 “Dolemite is My Name” is a Biographical Comedy

I screened “Dolemite” during the Toronto International Film Festival, and I am pleased to say, Eddie Murphy is back in a role that highlights his comedic genius. The film is based on the 1970s struggling filmmaker and irreverent standup comedian Rudy Ray Moore, a.k.a. Dolemite, in which Murphy portrays,
The film begins in Rudy’s early days of dreaming to make it big—to fulfill his goals, he decides to create outlandish characters for his standup acts, and he catches on. As his popularity grows, he releases an R rated underground comedy album followed by a feature film in which he stars.

This genre should be called ‘Hysterical Comedy’ as I laughed out-loud throughout the film. As an Eddie Murphy fan since his early comedic career, Murphy’s razor-sharp and lightning speed delivery have never been more pitch-perfect.

Murphy’s acting is at the top of his game here, look for an Academy Award nomination, and hopefully, more films that showcase his talents in the future.
“Dolemite” premiered at the Toronto International Film Festival and received an uproarious standing ovation.

As a bonus, costume designer Ruth Carter, appeared on stage for a Q&A. She spoke about Rudy Ray Moore’s Dolemite style and focused on his signature appliqué red rose.