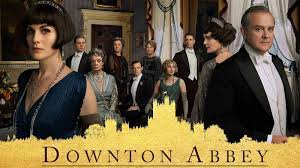 “Downtown Abbey” Is based on the Emmy winning TV series.

The year is 1927 and the King and Queen of England have decided to pay a social call to Downton Abbey! One can only imagine the hysteria that ensues, trying to accommodate the royal guests.

The cast is back:

The director is Michael Engler—he works with a light and airy script. You’ll view sweeping visuals, with an unchallenged drama for people who already know they will like it.  The musical score is a standout as well as the costume design.

And of course, Maggie Smith steals the show!