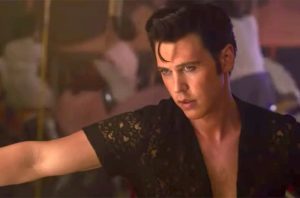 Elvis fan or not, Austin Butler and Baz Luhrmann have brought America’s biggest rock and roll star to life with a renewed understanding and empathy. Presented through Baz’s iconic filmmaking style—dazzling, frantic, glitzy, over-the-top visuals, it’s his best film to date. The great news is he’s made Butler into an instant star as his singing is so realistic that you can’t tell where he starts, and Elvis blends in. Additionally, presenting the side-carnival lens of Elvis’s career via Tom Hanks as Colonel Tom Parker is an enlightening move, as most don’t know that side of the story. The film is an enjoyable ride, just like the Ferris wheel shown in the movie, only you’ll sometimes feel that you’re riding a roller coaster.

Austin Butler has more in common with Elvis besides his gorgeous looks; both were the same tender age (23) when their mothers’ died; thus giving Butler a deeper connection due to their shared profound loss, which, in turn, garnered a heartfelt performance. And that’s just the beginning; Butler researched everything he could about Elvis for two years, including in-person meetings with Priscila Presley and visits to Graceland. His diligent study paid off, as he recreated Elvis in three different decades, of which Elvis’s mannerisms and speech also changed as he built confidence over the years. His character collaboration with director and co-writer Baz Luhrmann is evident; the goal was to present Elvis’s humble beginnings in Memphis, his musical influences, his complicated relationship with Colonel Tom Parker, his personal relationships with family, and, more importantly, his fans.

Beginning with his childhood in a lower-income neighborhood, Elvis’s family was one of the few white families in the primarily black neighborhood. Filmmakers do an admiral job retracing his roots attending church services with gospel preachers accompanied by rousing gospel choir music. The teen Elvis is seen driving onto Beale Street in his Crown Electric truck, wearing his Crown Electric uniform, and parks near the “Club Handy” neon sign. Beale Street is a thread that runs through the film with “Big Mama” Thornton (Shonka Dukureh), Little Richard (Alton Mason), and Sister Rosetta Tharpe (Yola). B.B. King (Kelvin Harrison Jr.) is introduced while shopping for flamboyant outfits at Lansky Brothers, the clothing store that would bill itself as “Clothier to the King.” “Colonel,” Tom Parker says in the film, “He was crazy for all Beale Street music. He had Beale Street stars in his eyes.”

Scenes with Pricilla Presley are handled lovingly and delicately to maximize his adorning love and minimize their unfaithful troubles on his part. The film’s core is the volatile relationship between him and Parker, who, we find out, isn’t an American citizen and most certainly is not a Colonel. He’s of Dutch heritage and resides in the USA illegally. He entered the army under an alias, although discharged at the end of his career with a mental illness condition. Although he built his reputation as a carny side-show promoter, he saw dollar signs when he discovered Elvis. He’s portrayed as cold-hearted, controlling, and bad-tempered, knowing exactly which buttons to push with Elvis. Hank’s performance was tricky, as the Dutch accent is sometimes annoying, although true to the source material. I thought his performance was creepy and conniving; he was very believable.

In many ways, the film is very sad. One can’t help but wonder if Elvis would have lived longer under different management. A cautionary tale, to be sure.

Again, the reason to see the film is its star Austin Butler; if he looks somewhat familiar, he appeared in Quentin Tarantino’s “Once Upon a Time in Hollywood,” although he played the gang leader murderer Charles Watson “Tex.” I have to say, Quinton has an eye for emerging talent, although with “Elvis,” this budding actor has risen to Hollywood stardom.