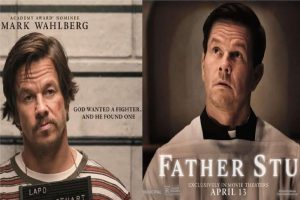 “Father Stu,” rated R is uncharacteristically rare for a film centered on religion—just know there are many swear words throughout the entire film. On that note, Mark Walberg stars as Stuart Long (Stu) based on the true story of a troubled, foul-mouthed boxer that decides to become a priest. The film’s setting is the 70s in Montana and Los Angeles. Stu’s birth date is 1963, Jackie Weaver plays his well-meaning mom, and Mel Gibson plays his abusive alcoholic father.

Beginning with a scene of his mostly absent father, Bill (Mel Gibson), we view Stu as a child, trying to get his father’s approval as he pretends to be Elvis Presley. Gibson, a snarly drunk, ignores his son and barks insults. Fast forward to Stu, as a boxer whose career is more about the injuries than trophies. When it is clear Stu cannot fight anymore due to serious nerve and muscle damage, he decides to go to Hollywood to become a movie star.

This transition is a bit muddled as Bill; his father also lives in LA, and that’s when we see Gibson and Stu constantly butting heads. Mom, Weaver’s role consists of phone calls and brief visits.

Working at the meat counter in a supermarket, he meets a beautiful girl named Carmen (Teresa Ruiz), who’s very committed to the Catholic Church. The totally smitten Stu ends up not only going to her church but also becoming baptized so he can date her. Stu’s career dream as a Hollywood star isn’t working out, and he uses alcohol to mask his troubles, resulting in a serious motorcycle accident, in which he barely survives. During his recovery, he has an epiphany about his future—he chooses to devote his life to the priesthood.

For someone with Stu’s background, his delivery and mannerisms aren’t in line with the kind of role model the church is looking for. Stu is now faced with fighting for his calling; he’s no longer throwing punches in the ring; he’s fighting for his inner peace.

Here’s a wonderful story centering on a person from a troubled background that finally figures out how he desires to live his life. I love the real story of Stuart Long and feel the filmmakers needed to have a non-self-serving purpose in its script and final print. Don’t get me wrong, I appreciated and marveled at Mark Walberg’s acting; hands down, he’s fantastic, as is Jackie Weaver’s performance. Unfortunately, Mel Gibson, as the snarly drunkard dad, was over-the-top. The debut film by screenwriter and director Rosalind Ross, Gibson’s girlfriend and mother of his 9th child, a five-year-old daughter, didn’t work for me. Gibson’s multiple, repetitive scenes are loosely stitched together—providing no purpose in moving the story forward. Plain and simple, he has too much screen time—the film is about Stu, not his dad. A seasoned neutral co-director would have at least offered insight as to the actual central story.

The worst part for me is Stu’s real dad was a really nice guy and not an alcoholic; it always bothers me when filmmakers malign a person’s true nature to suit their storyline. Stu’s true story stands on its own without Gibson’s performance. Another blow, Stu’s father is still alive and now lives with most thinking he’s a jerk. Another unforgivable fact, Stu’s younger sister, Amy, is erased from the family in the film. She and Stu had a loving brother-sister relationship; she idolized him.

The Bottom-line: “Father Stu” provides Mark Walberg with a role of a lifetime only to be overshadowed by Mel Gibson’s constant upstaging, drunken, snarly role—a false representation of the source material.