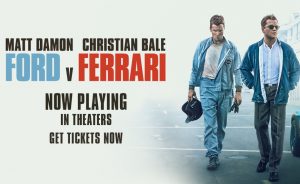 The film is based on the rivalry between the car manufacturers Ford and Ferrari in their pursuit to win the 24 hour Le Mans sports car race in 1966. I screened the film at the Toronto International Film Festival in September.

Lee Iacocca (Jon Bernthal) of Ford Motor Company recruits racer-turned-car-dealer Carroll Shelby and basically gives him carte blanche to build a winning car and race team. The goal is to not only design a faster car than the Ferrari Company, it’s to strategically win the grueling 24-hour race. The unconventional, British driver Ken Miles is known for getting the job done and has the intrinsic ‘desire to win’ brashness to succeed.

Both Damon and Bale portray their characters’ individualities without falling into the mold of stereotypes. Yes, Shelby is a cowboy hat, and boots Texan and Miles has the accent of a British citizen—however, their competitive drive and rough-and-tumble approach provide a hysterical yet typical scene given their characters. Both men resort to wrestling with bags of groceries on Shelby’s front lawn in order to prove their point.

Director James Mangold, known for his films “Logan” and “Walk the Line,” creates a film based on individual instinct and the willingness to get the job done, to take chances and simply go for the brass ring, or in this case go for the Le Mans trophy.

I interviewed Tracy Letts, who plays Henry Ford II, he told me that “Ford vs Ferrari” is a movie for everyone and a movie that should be seen on the big screen. 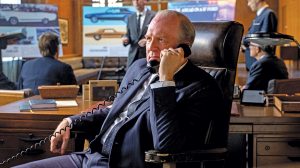 As an owner of a Ford Mustang, I loved seeing the history of the car and learning about the Le Mans race in France. The cinematography is stunning as well as the acting by all. Here’s the best part; you can bring the entire family! It’s a great holiday movie!