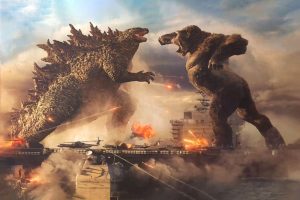 Hi Carl and hello everyone, tonight I have three movies. First up, the box office smash “Godzilla vs. Kong” PG-13; in the opening scene, off the coast of Florida, Godzilla is spouting his nuclear breath and wreaking havoc. Scientists are concerned as they know that Godzilla only reacts when something is very wrong. Soon we see Godzilla attacking King Kong. Yep, something is very wrong, as an evil force is behind this attack.

Indeed, the monsters encounter many fights; nonetheless, the underwater sea battles and the neon lite streets of Hong Kong’s skyscraper scenes rank as standouts. As each new film changes the monsters’ look, the latest versions are strikingly detailed, although Kong’s size seems to vary, with attention paid to Godzilla’s prickly spikes. An exclamation to the spike changes may account for the fact that Godzilla’s spikes are constantly growing and breaking; thus, the replacements inevitably are not identical. I must say the artistic bar has been raised as the attention to detail is shockingly apparent.

Director Adam Wingard directs a namedropping cast. Scientists Nathan Lind (Alexander Skarsgård) and Ilene Andrews (Rebecca Hall) are key players who are pressured by billionaire-philanthropist Walter Simmons (Demián Bichir) to use Kong to find a power source in middle earth. Nathan meets with Ilene and convinces her to let Kong guide them through the Hollow Earth via an outpost in Antarctica.

Written by Eric Pearson and Max Borenstein, Kong is portrayed to have a bit of a softer side. He has a friendship with a young girl named Jia (Kaylee Hottle), whose guardian is Ilene Andrews. a sensitive scientist played by Rebecca Hall. Jia and Kong use sign language to communicate, which garnered a smile from this reviewer. We see a genuine connection between the two, and this gives Kong an edge in the ‘who are you rooting for’ arena.

Other cast rounds out the films as (Millie Bobby Brown), plays a determined teen, she was also in “Godzilla: King of the Monsters,” along with Kyle Chandler, who once again plays her father, the uneasy administrator. Although the people take a back-seat here, truly the most glorious scenes are the battles Kong, Godzilla, and the new force that they engage in battle. It’s best to let the film unfold and not know too much about those scenes as truly they are worth the price of admission—no spoilers here. All I can say is that I look forward to seeing the film in a big gigantic scene soon.

The Bottom-line: I’m way in, 3½ stars out of 4; I’m a huge fan of both monsters. I really enjoyed the special effects in this one, especially the Hong Kong Skyline scenes along with the battles. 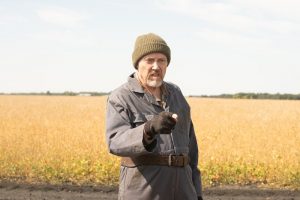 In the film “Percy vs Goliath,” Christopher Walken and Christina Ricci star in the true story of a Canadian farmer in 1997, who is sued for allegedly using patented seeds to grow his crops.

Clip: We heard your story; you are fighting; you bring us hope. $1.2 Million; that’s how much you owe. We are going to lose the farm.

Christopher Walken delivers an excellent performance as Percy Schmeiser, the real-life Saskatchewan canola farmer who was sued in 1998 for using patented Monsanto seeds without a license. The seeds were genetically modified to be Round-Up resistant—the resulting plants would survive spraying with the Monsanto weed killer, while non-Monsanto seeds would not.

Most small farmers, then or now, don’t have the means to wage a legal battle with a major corporation like Monsanto. The underdog story is about a controversy that still resonates with folks. Zach Braff plays attorney Jackson Weaver, who takes on Percy’s case though he thinks it’s a losing battle.

Clark Johnson directs as we learn about Schmeiser’s multi-generational farm and the fact they had always used its own seeds, propagating the healthiest plants every year. Monsanto applied pressure, but he ignored it—a pleasant discovery was finding out about the support from farmers from around the world who the company had already ruined. It’s not a spoiler to say he won, and he’s one of the folks Monsanto ended up paying millions in restitution. Finally, a celebration for the little guy. It also stars Roberta Maxwell, Adam Beach, Martin Donovan, Peter Stebbings, and Luke Kirby.

I’m way in, Four Stars out of Four. This is an inspirational story with a Great ending! Thanks for listening in tonight, this is Sarah Knight Adamson for Sarah’s Backstage Pass.