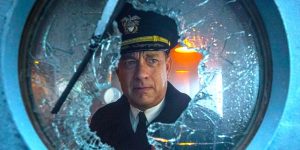 The Greyhound is a US destroyer Naval ship, and Capt. Ernie Krause, played by Tom Hanks, is in command. The film is directed by Aaron Schneider, who was inspired by Hanks’s war film “Saving Private Ryan” to adapt and direct William Faulkner’s “Two Soldiers” novel into a short film. Schneider won the 2004 Oscar for his Live Action Short Film, “Two Soldiers.” The inspiration for “Greyhound” comes again from the films “Saving Private Ryan,” with the addition of “Apocalypse Now,” and “Das Boot.” 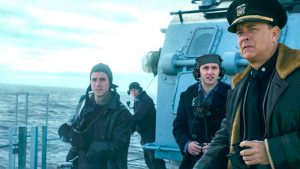 The “Greyhound” script, written by Hanks, is adapted from the 1955 novel “The Good Shepherd” by C.S. Forester, best known for his “Horatio Hornblower” adventures and classic “The African Queen.” His script is focused on the Captain’s faith, devotion to his girlfriend, whom he hopes to marry, and this command of the Greyhound. His job was to guide a convoy task force leading 37 supply ships across the Atlantic, to Britain, in 1942. The Nazi U-boats travel in “Grey Wolf” packs, bestowing strategic challenges.

The Bottom-line: I’m way in 3½ stars out of 4. Similar in tone to the film “Dunkirk,” slight on narrative heavy-handed on facial expressions. Tom Hanks is superb! At 91 minutes, “Greyhound” is an understated, matter-of-fact, historical film.

Thanks for listening in tonight, this is National Film Critic Sarah Knight Adamson, check out my website: Sarah’s Backstage Pass.com.