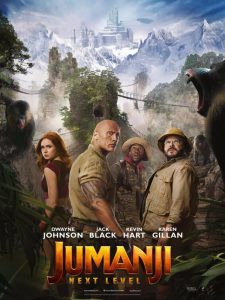 Jumanji: The Next Level (PG-13) by Sony Pictures

All the cast is back, in the sequel although this time Dwayne Johnson, Kevin Hart, Karen Gillan and Jack Black have new character changes when they return to Jumanji.

The director is Jake Kasdan, the studio is Sony Pictures.

Here’s the main problem, when the cast return to Jumanji they switch avatars and it’s very confusing to know who is playing what character—to make matters worse, they switch several times in the movie.

There aren’t any new or fresh ideas, but if you’re looking for a few laughs, then you’ll be entertained!