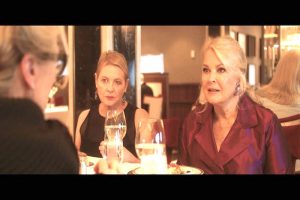 “Let Them All Talk” is a comedy-drama film rated R for its language, directed by Steven Soderbergh with the screenplay by Deborah Eisenberg. The film boasts an all-star cast: Meryl Streep, Dianne Wiest, Candice Bergen, Lucas Hedges, and Gemma Chan. It’s streaming now on HBOMAX.

Meryl Streep plays Alice Hughes, a famous Pulitzer Prize author who gathers her two friends, nephew and publishing agent, to join her on a cruise aboard the Queen Mary, which will eventually dock in London.

Alice is having a bit of a writing slump while also trying to reconcile with Candice Bergen’s character, whom she upset deeply by writing about her personal life.

Clip: “Sometimes, the sources that writers use are very close to home.” “That’s a little pompous.”

I’m all in 4 starts out to 4, the seasoned cast here is the reason to see the film. Soderberg used an unconventional filmmaking method by using only an outline instead of an actual script, take notice of the cast improvising their lines. It’s an enjoyable film about friendship, regrets, and even a new romance, with a natural and organic tone.

Again, this is Sarah Knight Adamson for Sarah’s Backstage Pass.com Thanks so much for listening in tonight; I’m in my 14th year as a film critic and enjoy filling you in on the latest movies and TV shows.
See you next week.