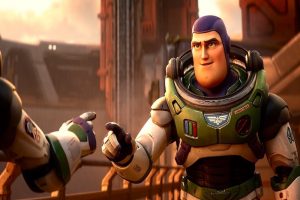 Disney Pixar’s animated “Lightyear” accomplishes its main film orbit in transporting a family-centered story with engaging characters with just the right amount of humor and adventure—after all that’s what you’d expect from a space ranger hero. Despite its “Toy Story” origins, the film serves as an entertaining stand-alone movie now voiced by Chris Evans—formerly Tim Allen. Buzz and his space ranger friends battle the evil Zurg, voiced by James Brolin, along with the help of his new sidekick, Sox (Peter Sohn), a robot cat with a big personality. Buzz kicks off the film with his commander Alisha Hawthorne voiced by Emmy Award winner Uzo Aduba; they are heading home from a space mission with a crew of more than 1,000 scientists and technicians. And yes, there is trouble ahead!

Completing a mission is Buzz’s primary job above his own personal comforts, and we see his commitment noticeably throughout the film. His relationship with Commander Hawthorne is highlighted, as they entertain complementary strengths with trust and respect at the core. Co-writer Angus Maclane, who also serves as director, creates characters using fellow characters. Buzz’s attributes of concern, love, and humor for his commander /partner/bestie are written beautifully and similarly; vice versa in Hawthrone’s dialogue.

The story is stitched together with our hero making a few mistakes, although audiences will root for him even more, when he immediately begins to fix them. With his self-imposed motto of “finish the mission,” Buzz takes it upon himself to find the right fuel formula that will allow the ship to leave the planet. As time passes, Buzz finds that his tunnel vision on the mission at hand costs him more than he figured, resulting in new, unexpected dangers.
Be sure to check out Keke Palmer’s scenes as the amazing granddaughter of Alisha, as she’s written with wit and loyalty. This family film truly takes you to infinity and beyond!