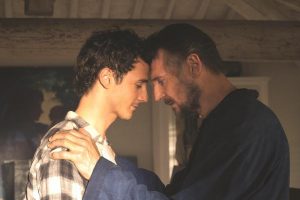 Hi Carl, and hello to our Hollywood 360 listeners out there. Are you looking for a film that will take you to the gorgeous countryside of Tuscany, Italy?

How about a film that stars Liam Neeson and his real-life son Micheál Richardson? Tonight, I’m going to talk about “Made in Italy.” 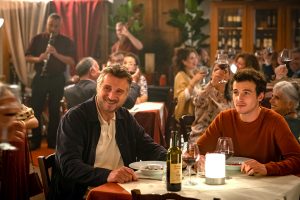 I interviewed Micheál Richardson last week and asked him what it was like to star with his dad, here’s what he said: “It was my first lead role, so it was the most consistent I had worked in my life. And I had my dad with me the whole way and such a beautiful cast and crew. So I was lucky with my first experience.”

The script centers on a conflict between a father, Liam Neeson, Robert, a painter, and his son Me-Hall, Jack, who showcases artists’ in a British art gallery.

The Bottomline: I’m in 3½ stars out of 4. The fact that Liam Neeson and his son are playing characters that experience the same family devastating loss is captivating. Many of you know that Liam Neeson’s wife, Natasha died 11 years ago after a ski accident. Micheál changed his last name to honor her. Director James Darcy captured realistic and natural performances by both father and son.

The film is also comical, and the Tuscany hillside scenery, well it’s breathtaking! I really enjoyed this film!

Check out my Video Interview with Micheál Richardson on my website: Sarah’s Backstage Pass.com, thanks for listening in and see you next week.

Micheál Richardson Interview “Made in Italy”