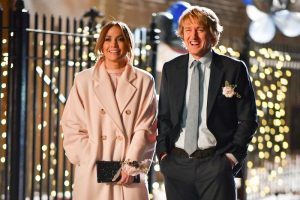 It is a romantic comedy movie that’s opening this weekend in theaters and streaming on Peacock.

The romantic comedy opens just in time for Valentine’s Day, starring Jennifer Lopez and Owen Wilson. Lopez somewhat plays herself as the musical superstar, Kat Valdez, Wilson plays Charlie Gilbert, a math teacher—they are total strangers who agree to get married and then get to know each other—beginning as an impulsive reaction that gradually evolves into an unexpected romance. 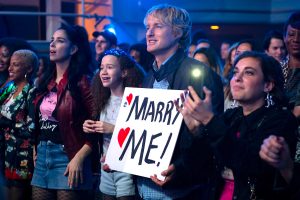 The film explores the lives of two people living in very different worlds and finding their comfort zones in each other’s space. We’ve seen this storyline before; what makes the film interesting is seeing Lopez’s adjustment to a normal everyday life without selfies, cameras, or videos. Basically, it’s the unlikely romance of two different people searching for something real in a world–not one based on the number of likes and followers. “Marry Me” is a modern love story about celebrities, marriage, and social media.

Director Kat Corio combines Lopez’s songs in unique and enchanting situations. What’s great about the film is Lopez sings new songs that are really very good, and the story is so charming it’s irresistible. The script, although somewhat predictable, has just the right amount of twists that keep the film in sync. 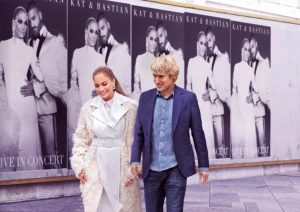 The Bottomline, I’m in, three stars out of four, as rom-coms go, this one wasn’t too surprising, although it wasn’t dull either. Both stars are engaging, “Marry Me” is the perfect date night movie; I’d say check it out.