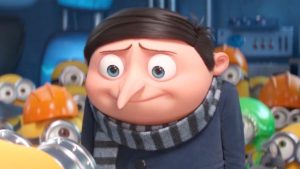 “Minions: The Rise of Gru” takes place before the original “Despicable Me” movie franchise that started in 2010; therefore, it’s a prequel. With a setting of the 1970s, young Gru is proudly 11 and ¾ years of age—and eager to be villainous as he proclaims to his classmates during his career speech. The catchy retro 70s soundtrack is paired with the action, as in one of the first songs, “There’s a Bad Gru on the Rise.” From the get-go ‘Rise of Gru” lays out the groundwork while we are simply along for the silly ride.

To fulfill Gru’s dream of becoming a villain, he tries to join a group of supervillains called the “Vicious Six.” The evildoers are comprised of Belle Bottom (Taraji P. Henson), Stronghold (Danny Trejo), Nunchuck (Lucy Lawless), Vengeance (Dolph Lundgren), Jean-Clawed (Jean-Claude Van Damme), and Gru’s personal favorite, the legendary Wild Knuckles (Alan Arkin). He’s granted an interview and is laughed out of the room due to his age. “Evil is for adults,” Belle tells him, “Not for tubby little punks.” He has the last laugh as he steals the precious Zodiac Stone, which has the power to turn people into any of the 12 Zodiac animals.

After his dreadful interview, he turns to their prior leader, the elderly Wild Knuckles, who has been kicked out of the group. Together they plan heists and develop evil plans, all of which are hysterical. Especially a bank robbery in which Gru is supposed to charade as Wild Knuckles’s grandson. Although, as you can guess, Wild Knuckles sees a chance to steal the precious stone from Gru.

Those squishy yellow minions are always up to their tricks. Look for an airplane scene where they impersonate pilots and fly a plane with all their hysterical antics, as in getting stuck in the toilet covered with pink toilet paper. Linda Ronstadt’s, “Your No Good,” is appropriately utilized as is “Vehicle” by the Ides of March; the soundtrack adds to the tone and feel creating a fun and sing-song tone. The kids in the audience were clapping along, and some were humming.

The ultimate climax of the Vicious Six standoff didn’t really work as it would have been more entertaining keeping the gang in their current state. Belle grabs the magic stone, and she uses its powers to turn her and the team into giant feared animal monsters. Belle becomes a fire-breathing dragon, Strong Hold becomes a bull, Nun-Chuck becomes a snake with large fangs, Svengeance becomes a tiger, and Jean-Clawed becomes a huge monkey (with his lobster claw arm). They grab Gru and tie him to the hands of a clock tower, which will slowly tear him apart. These cartoon representations were unnecessary while distracting and scary.

Master Chow (Michelle Yeoh), a Kung Fu Master earlier in the movie, teaches the three of the minions fighting skills, yet is underplayed as the ferocious Master Chow, a martial artist turned acupuncture therapist who helps turn the yellow guys into itsy-bitsy Bruce Lees. She and her Kung Fu minions should have saved the day, instead, they turn into a funny goat, rabbit, and a chicken.

I did love the fresh vibe. The movie is at its best when the minions and Gru are goofing around, making something out of nothing. The 70s setting is paired with a soundtrack of the period, creating a fun-loving mood. It was great screening the movie with a theater full of kids who clapped in appreciation at the end.

Look for Diana Ross’s new song “Turn Up the Sunshine” during the ending credits, as it just may be nominated for an academy award.

I spoke with two 8th graders, Easton and Caden, after the show and asked them to give the movie a rating; one said 3.9 out of 4 and the other 5 out of 4. One of the boys said he was “speechless” as he liked it so much. They felt the 70s soundtrack added to the fun of the movie.