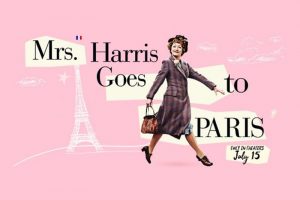 Lesley Manville stars as an older widowed cleaning lady Mrs. Harris in 1950s London who falls in love with a Christian Dior dress—she decides to save her meager earnings until she has enough to buy one. This enchanting fairy tale nudges all never to stop giving up on your dreams. The Focus Features movie is now playing in theaters and streaming on TV. Reminiscent of Paul Thomas Anderson’s excellent “Phantom Thread” film, also with Lesley Manville and Daniel Day-Lewis as a couture designer in 1050s Paris.

The story is based on Paul Gallico’s 1958 novel, with director Anthony Fabian at the helm. Ada Harris (Manville) takes a reprieve from scrubbing floors and washing the windows of her stereotypical snobby London clients to experience the glamor of haute couture in Paris’s House of Dior in the 1950s. The humorous script and Manville’s outstanding performance are the reasons to see the film. The always fascinating Isabella Rupert co-stars as a snobby Dior executive, a similar role to Manville’s in “Phantom Thread.”

The Bottomline: “Mrs. Harris Goes to Paris” is about more than just wanting a new dress; it’s about pursuing your dreams under impossible circumstances. Lesley Manville’s excellent performance is the reason to view the film. Her virtues of kindness and empathy are front and center. The film works as the story never gets too comfy; Ada’s roadblocks are many throughout the film. Manville and Huppert are awe-inspiring to watch, as is the young Dior staff learning the ropes yet setting new ethical principles to revamp the arrogant old ways of conducting business. The ending will bring a smile to your have and tug at your heartstrings. 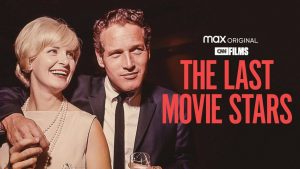 “The Last Movie Stars” is a six-part documentary from CNN Films and HBO Max that sheds light on Paul Newman and Joanne Woodward’s iconic careers, marriage, and philanthropic endeavors. Director Ethan Hawke’s personal project brings to life their love story told through talented actors such as George Clooney (Newman) and Laura Linney (Woodward). Unusual and enticing are words that describe the series’ circumstances; when Paul Newman started writing his autobiography, he interviewed many people he knew, including his first wife, Jackie Witte. For reasons unknown, Newman burned all the audio interviews, and his book never came to fruition. However, the tapes were transcribed, leaving a plethora of fascinating insights, stories, and heartfelt truths.

Director Ethan Hawke says, “It’s an honor to get to share Joanne and Paul’s inspiring life and love story with audiences this summer. I’m especially thrilled that a project we’ve poured so much heart and soul into now has its home at HBO Max, a platform known for celebrating and championing the documentary art form.” Clearly shot during the Covid pandemic, Hawke’s informality is amusing, especially with his various stages of hair; both his facial and head, sometimes orderly and sometimes chaotic, add to the authenticity of the task at hand—of telling Newman and Woodward’s life story. 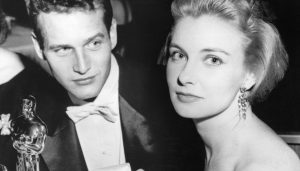 You’ll see Hawke talking to many Hollywood people, as well as friends and former family; including his daughter Maya (“Stranger Things”), his wife, Ryan, Newman and Woodward’s kids, Vincent D’Onofrio, Karen Allen, directors Martin Scorsese, George Roy Hill and Sidney Lumet, Laura Linney, Zoe Kazan, Gore Vidal, Oscar Issac, and Sam Rockwell. Most of what you will see on-screen are Zoom calls alongside clips of Newman and Woodward. I love the ‘go with the flow’ tone of the series—at one point, we see Hawke holding up his computer and walking to find the right spot to receive better reception.

The takeaways are that Woodard was the more assured and natural actor; she won an Oscar in her twenties. Newman was the all-American good-looking guy, his emotions rarely showed early in his career, yet he was exciting to view. Newman’s accolades came later in life. He was nominated for 10 Academy Awards and received three, one for Best Actor in “The Color of Money”; the others were an Academy Honorary Award and the Jean Hersholt Humanitarian Award for his charity work.

Myself, upon viewing all six episodes, I will say that there were many aspects of their lives I didn’t know. In particular, Paul was married and had three children when he fell in love with Joanne, having a five-year affair with her. Also, I didn’t realize how many movies they made together, (16), and other interesting tidbits from the interviews. What’s really surprising about this series is that Hawke tracked down Newman’s first wife, Jackie Witte. She’s on camera, his first family kids are on camera, and they say exactly how it felt not to have their father living in their home.