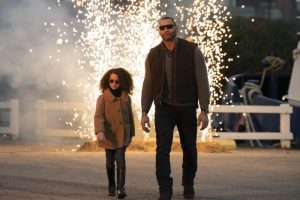 “My Spy” is an action-comedy movie starring Dave Bautista known for his work in the “Guardians of the Galaxy” movies playing Drax. Here he plays CIA agent JJ, who is surveilling a 9-year-old (Sophie) played by Chloe Coleman and her mom, played by Parisa Fitz-Henley (Kate).

The ever-precocious Sophie discovers hidden surveillance cameras in her house. She decides to blackmail JJ as she wants to learn how to be a spy. The setting is Chicago, although Toronto is where the film was shot.

The director is Peter Segel, who’s no stranger to spy comedies, he directed the 2008 film, “Get Smart.” JJ’s CIA partner is the comedy talent Bobbi (Kristen Schaal). She adds her comedic chops in an expanded role that features some hilarious moments.

Kate and Sophie have recently moved to Chicago after the sudden death of Sophie’s father. Unfortunately, Sophie is finding that being the new girl in school is not easy. She’s having a hard time settling in—JJ is the perfect buffer to help her adjust. When JJ presents his career talk to her class, suddenly Sophie finds herself with many new friends.

The Bottom line: I’m in 3 stars out of 4, here’s a family comedy for older kids that is funny and loveable. Bautista shines in his role as a surrogate father, or AKA “Kindergarten Cop.” character. He and Chole Coleman have a natural comedic chemistry that is not easy to replicate.
Be sure to check out the Chicago scene where they head west on I88 toward Naperville for a crazy airplane chase. I’d actually like to see a sequel to this movie!