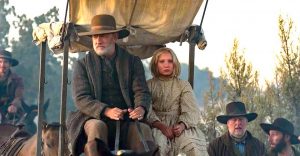 Hi Carl, I’ve got two movies that opened on December 25. First up: “News of the World” based on the bestselling 2017 book by Paulette Kay Jiles. After reading this great book, I thought this would be an excellent movie, and sure enough, it is! Streaming now on Netflix.

The film stars Tom Hanks as a retired Civil War Captain, Jefferson Kyle Kidd. Helena Zengel, as Johanna Leonberger, plays a 10-year old girl he is paid to deliver to her aunt and uncle; she had been living with the Kiowa people for the past four years after they kidnapped her and murdered her parents.

Their long journey turns into a fight for survival as they encounter danger from both humans and natural elements.

Clip: “Captain, why are you doing this? She needs to laugh and dream; she needs new memories.”

I’m way in four stars out of four screenplay writer, and director Paul Greenhouse presents a story of compassion, love, and family. “News of the World” is my favorite movie of 2020. Tom Hanks’ acting is phenomenal—he is the reason to see the film along with a break-out performance of Helena Zengel. 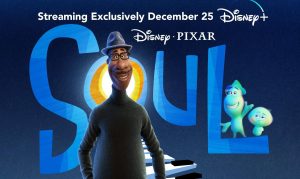 Here’s an animated jazz film that asks the question, “What is it that makes you special? Jamie Fox voices a New York City band teacher, Joe Gardner, who will finally follow his dream of playing gigs in a band—although suddenly his life could be over before he makes his dream come true.

Joe’s a grown man still living with his mom (Phylicia Rashad) and having a hard time making it on his own. His luck changes when he hears that Dorothea Williams (Angela Bassett), a great saxophone player, needs a piano player for her jazz quartet, and he lucks out by scoring an audition.

The tricky part of the movie for kids may be the next scenes when Joe walks across the street and falls straight down a maintenance hole—he doesn’t die, although his body turns translucent, and he begins to ascend upward toward a shining light. It becomes known that he’s going toward “The Great Beyond.” Although he’s marooned in “The Great Before,” a place where personalities/souls are assembled and dispersed to those who are about to be born. This realm of sorts is a way station run by ghostly creatures, many of whom are called “Jerry.” Joe is determined to find his way out. In a hysterical role, Tina Fey voices an irritated and pessimistic infant soul named, No. 22. She is Joe’s ticket out.

The music enriches the gorgeously drawn visuals. “Born to Play” is the name of one of the movie’s many songs composed, arranged, and performed by real-life musician Jon Batiste. He’s one of the animated film’s musical consultants in addition to  Herbie Hancock, Daveed Diggs, and Questlove. The beats are free-flowing, with scenes of dream-like melodies. A phantasmagoric tone,— one in which is so strange or different, it doesn’t appear real. It’s the fine line between reality (earth) and the near heaven sequences.  The dreamy soft translucent blobs represent an unformed being. Directed by Peter Docter and co-directed by Kemp Powers; together the love of jazz is explored along with the notion of following your dreams.

Utilizing Jamie Foxx and Tina Fey’s push-pull duo works as his ambitious, optimistic, and vulnerable energy is catchy. At the same time, 22’s ambivalence and pessimism form a tender bond that works.

I’m all in four stars out of four; here’s a film that’s perfect for the entire family. Similar in tone to Disney’s “Inside Out,” kids and adults are shown that through our differences, we shine as people and that it’s never too late to follow your dreams.

Thanks again for listening in tonight; this is Sarah Knight Adamson for Sarah’s Backstage Pass; see you next week.