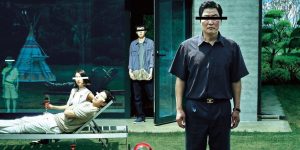 The story is of a family of four living in South Korea; they are so poor they fold Pizza boxes to make a living. Suddenly, everything changes when the older son is hired as a tutor to teach a wealthy families’ High School daughter English.

Eventually, all four family members are working in the home, until, a parasite (bad karma) threatens their easy-street plan. Boog Joon-ho directs the film.
The film is sarcastically brilliant, hysterical, clever, and frenzied. The cinematography is glorious! My recommendation is to not read too much about the film; it’s better to view the movie without knowing too many details, although I will warn you to be prepared for bloody horror scenes that all lead to a message of hope.