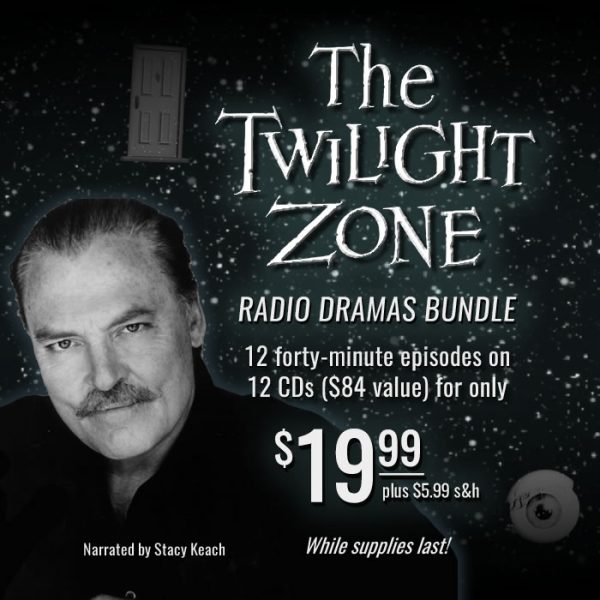 The ultimate Twilight Zone experience! For a limited time, get 12 forty-minute episodes on 12 CDs ($84 value) for only $19.99 plus shipping and handling of $5.99, hosted by Stacy Keach. Good while supplies last!

Producer Carl Amari, decided to present new-time radio dramatizations based on The Twilight Zone and licensed the rights from CBS Enterprises and The Rod Serling Estate. A lifelong fan of radio drama, Amari knows and loves the best the medium has to offer, from Suspense and Escape to Dimension X and X Minus One. But his goal is not a nostalgic recreation of radio as it once was. Instead, Amari has commissioned fresh adaptations by World Fantasy Award-winning writer Dennis Etchison, based on the original scripts preserved in the Serling archives. The result is a powerful, imaginative series designed for the theatre of the mind. Superbly recorded in digital stereo, hosted by Stacy Keach and starring today’s most remarkable actors, these exciting productions take the art of audio drama to the next level. They will transport you to a fifth dimension beyond that which is known to man, a land of both shadow and substance, of things and ideas. It is an area which we call …. The Twilight Zone Radio Dramas!