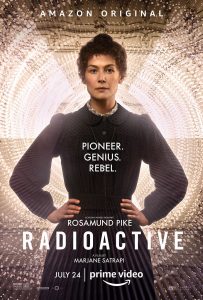 Hi Carl, Sarah Knight Adamson here, as a reminder I’ve been in the film critique business for over 14 years and a member of Critics Choice Awards in LA. My reviews and interviews can be found on Sarah’s Backstage Pass.Com.

This week’s movie is Radioactive; it’s rated PG-13.  The film is the dramatic story of Marie Curie’s life beginning in the 1870s. We see her scientific Nobel Prize awards and the darker world events that occur in the future due to her discoveries.

“Radioactive” is based on the graphic novel, “Radioactive Marie & Pierre Curie a Tale of Love and Fallout” by Lauren Dedness.

In late 19th century Paris, Marie, Rosamund Pike from “Gone Girl,” met a fellow scientist named Pierre Curie played by Sam Riley. They married, raised two daughters, and changed the science forever by their discovery of radioactivity. In 1903, they jointly won the Nobel Prize in physics for their discovery, making Marie the first woman to win the revered prize.

Unfortunately, Pierre, is killed by a freak accident. A distraught Marie throws herself into her scientific work, thus paving the way for her to continue her obligation to science.  Her unwavering work went on to win her second Nobel Prize, in Chemistry. Unfortunately, her continual exposure to radium caused her untimely death. The director is Marjane Satrapi.

The Bottom-Line: I’m in 3 stars out of 4. We learn a great deal about Marie Curie, through Rosamund’s Pike exceptional portrayal. Sadly, screenwriter Jack Thorne’s dismal script, is a downer.

Thanks for listening in tonight. See you next week!