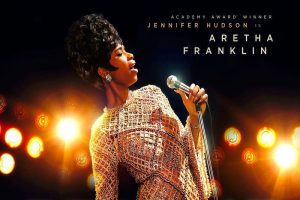 “Respect” is a powerful biopic drama of Aretha Franklin’s life starring Academy Award winner Jennifer Hudson portraying Aretha Franklin. Hudson embodies the role as if she were meant to play the Queen of Soul, Franklin’s title in the music world. As a teenager, the minute we hear Hudson singing in a church in Birmingham, Alabama—where Martin Luther King, Jr., is preaching about civil-rights protests, we are hooked. The heartfelt performance is the centerpiece of the script as well many of the songs in recreating Franklin’s essence.

The film starts at the early beginnings of Aretha’s life (nicknamed Re Re) at the age of 10 years; she’s a gospel singer in her father’s (Forest Whitaker) church. We also view ReRe being awoken from a sound sleep to perform before party guests late at night. It becomes clear that Aretha was not protected in her own home as she becomes pregnant and delivers a child at 13 years of age. The storyline of her two out-of-wedlock children by the age of 15 is not revisited nor developed in the film, casting a sad shadow from the start.

The film transitions quickly to an older Aretha, giving us our first glimpse of Jennifer Hudson; we’re also privy to our first sound of her powerful yet talented singing voice, which carries the entire film. We view her life on the road as a singer and performer. Her struggles with men insisting on controlling her and her rise to the top. The structure of the film is similar to viewing biopics, such as “Walk the Line,” “Get on Up,” “Rocket Man,” and “Bohemian Rhapsody.”

A few of my favorite moments consisted of writing the song “Respect” alongside her sisters. Re, Re, Re coincides with her nickname ReRe, the connection to her name and the song is telling. The ending credits were moving as we saw and heard the real-life Aretha singing as the numerous awards and honors flashed across the screen.

The Bottomline: Director Liesl Tommy has chosen to highlight Jennifer Hudson’s incredible singing voice that, in oh so many ways channels Aretha Franklin, the songs gave me chills, as I’ve been lucky to have seen Miss Franklin perform in Chicago on New Year’s Eve in 2003. The script has some loose ends, but all is forgiven each time we hear Jennifer Hudson sing. And did you know that Jennifer Hudson and Aretha Franklin were very close friends?