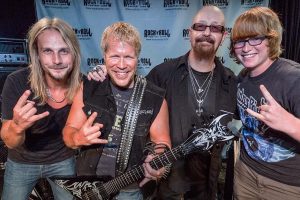 Hey Carl, I’m not sure if you’ve ever seen Ringo Star and his All-Star Band perform, tonight I’m going to review the film “Rock Camp: The Movie” that was inspired by Ringo’s tour promoter, David Fishof.

Fishof had the idea to start Rock and Roll Fantasy Camp, where fans would have the experience of learning and playing with their favorite musicians. Roger Daultery, the lead singer of The Who, talks about why he enjoys working at the camp and other rock royalty, including Joe Perry, Slash, Clarence Clemons, Meat Loaf, and Joe Walsh, along with Paul Stanley and Gene Simmons, of Kiss.
Several rockers Alice Cooper, and Heart’s Nancy Wilson, are interviewed on-camera about their time at the camp.

The Bottomline, I’m in 3 stars out of 4; I always appreciate examples of kids and teens being mentored in films, and this one is great. You’ll also see business people, doctors, and lawyers benefit from their camp experience. The Director is Doug Blush, and the film is streaming on Amazon and Apple TV, February 16. Check it out.

Thanks for listening in tonight. This is Sarah Knight Adamson for Sarah’s Backstage Pass.com. See you next week.