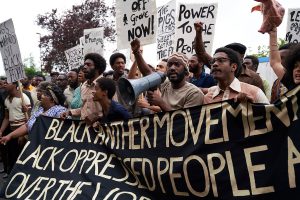 Hi Carl, many of us know of our racial history here in the United States. The movie “Mangrove” centers on the racial discrimination in London’s Notting Hill area in the 70s. It is a terrific two-hour film that’s part of the “Small Axe” series.

Small axe refers to an African proverb that means:

‘Together we are Strong,’ and is based on a true story. Frank (Shaun Parkes) is the owner of Notting Hill’s Caribbean restaurant, Mangrove. The restaurant is a lively community base for locals. Although there is one big problem, the racist local police continually raid Mangrove. Frank and the community decided to protest peacefully in 1970.

Nine men and women, including Frank and leader of the
British Black Panther Movement played by (Letitia
Wright), are illegally arrested in a highly publicized trial that changes the laws for the better.

The director is Steve McQueen; he based the story on his upbringing in London’s West Indian neighborhood.

The Bottom-line: I’m way in four stars out of four; the historically true information is one reason to see this film. Although, for sure, the film represents a celebration of food, family, community, and togetherness. The acting, cinematography, and script are all excellent. “Small Axe” is streaming now on Amazon Prime.

Thanks so much for listening in tonight. This is Sarah Knight Adamson for Sarah’s Backstage Pass.com. I enjoy bringing you the best in TV and Film, and please check out my website. See you next week.