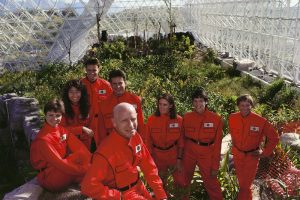 “Spaceship Earth,” is a true documentary film that follows the journey of eight conservationists, who spent two years quarantined inside of a replica of the Earth’s ecosystem, called BIOSPHERE 2. The year was 1991 and the place Oracle, AZ.
In using archival and present-day footage, the film begins 20 years before the eight individuals enter the glass enclosure led by their visionary leader John Allen.

The Bottom-Line: I’m in 3 ½ stars out of 4. Director Matt Wolf’s background film footage, along with narration, adds tremendously to the dream of the groups’ final experiment. The film asks two questions—Are they a cult? Or are they simply a focused group working towards a common goal? You be the judge, check it out! 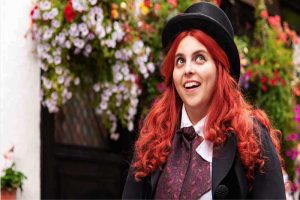 “How to Build a Girl,” (R) is a movie streaming now. Beanie Feldstein stars as a 16-year-old gifted writer and outcast, living in England in the 90s.  She longs for acceptance by her peers. It’s based on the book of the same name by Caitlin Moran.

Landing a dream job of a staff music critic, she reinvents herself as Dolly Wilde, an outspoken loudmouth who becomes the life of the party.

The Bottom-Line: I’m in 3 stars out of 4 Beanie Feldstein is the reason to see this film, we view her many moods and personas. A fun, wild, crazy ride with a great message about friendship. The director is Cokey Giedroyc of England.