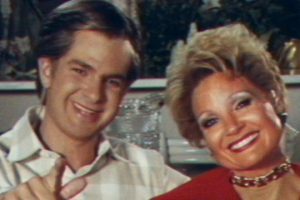 Hi Carl, and hello to all of our listeners out there, tonight I’m going to talk about the film that everyone’s talking about, “The Eyes of Tammy Faye,” rated PG-13. The film stars Jessica Chastain in an Oscar-worthy performance as Tammy Faye. Her message of love, acceptance, and prosperity her the hallmarks of her gospel life. Tammy Faye’s signature long, black curly eyelashes set her apart and gave her an iconic look she craved.

Andrew Garfield as her husband Jim Bakker, who also gives a riveting performance. We see the rise and fall of televangelists Tammy Faye Bakker and Jim Bakker during the 70s and 80s. They created the world’s largest religious TV broadcasting network named the PLT (Praise the Lord). She’s most known for her long black eyelashes, her crying on TV, her singing voice, and her acceptance of all.

Their lavish lifestyle came to an end when Jim Bakker began breaking the law with his pay-off’s using their religious funds.

The film is directed by Michael Showalter, and it should be noted that Jessica performed all of the songs in the film using her own voice.

The Bottomline? I’m in 3 stars out of for; both leads carry the film from start to finish; we do see Tammy Faye as a younger child, showing us the emotional pain she suffered. Unfortunately, the script is repetitive and doesn’t develop the characters to their fullest extent. Look for Oscar nominations for both.

Thanks for listening in tonight; this is Sarah Knight Adamson, your National film and TV critic for Sarah’s Backstage Pass… I’ll see you next week.