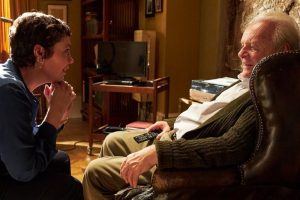 Hi Carl, tonight I’m going to review a film that could bring an Academy Award nomination for Anthony Hopkins in the Best Actor category. This film played at the Toronto International Film Festival in 2020 and is playing in theaters and streaming now.

Hopkins plays a father who has dementia and refuses all assistance from his daughter, played by Olivia Coleman of the Netflix series “The Crown.”

Here’s what is unique about this film compared to other films on memory loss— it is told from the father’s point of view. For example, when his daughter walks into the house, at times, he doesn’t recognize her. When viewing the film, we see a totally different actress playing that part. We see what the father sees. 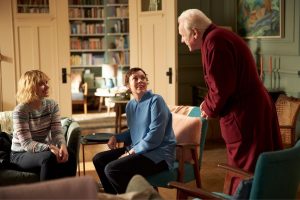 “I don’t need you. I don’t need anyone,” shouts Anthony (Hopkins), his name being the same as his characters as his daughter Anne tries to give him a little support. Anthony lives in a London flat, but she has some disturbing news to divulge. Ann is getting ready to move to Paris, and the proclamation launches him into a tirade until he stops himself and asks meekly, “What’s going to become of me?”
The film is based on a play that Frank Langella won a Tony award for his role. The director is Florian Zeller.

The Bottomline- I’m way in 3 and a ½ stars out of four. “The Father” is the closest we have ever seen on screen how a person with dementia navigates their new world. The frustrations, the adaptations, and the sense of worry.

Here’s the deal, this is a very tough film to watch, especially if you’ve gone through this disease as I have with my own father. I did shed a few tears, although seeing the visual reality of what my father may have seen conveys new light and perhaps understanding. Anthony Hopkins is at the top of his game in this award-worthy performance.

Thanks so much for listening in tonight; this is Sarah Knight Adamson for Sarah’s Backstage Pass.com. I enjoy bringing you the best in TV and Film, and please check out my website. And I’ll see you next week.