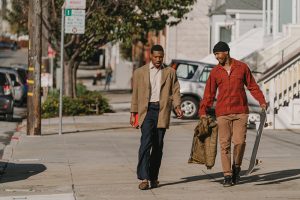 Jimmie Fails and Jonathan Majors appear in The Last Black Man In San Francisco by Joe Talbot, an official selection of the U.S. Dramatic Competition at the 2019 Sundance Film Festival. Courtesy of Sundance Institute | photo by Peter Prato / A24.

The film is a drama based on the true story of actor and former San Francisco resident Jimmy Fails. It’s about his dream of reclaiming the Victorian home his grandfather built in the heart of San Francisco. Jimmy Fails has said in interviews, “I know this sounds weird, but the movie is about a love story between me and a house!”

The writer and director is Joe Talbot, also stars Danny Glover. In many ways the film is a love letter to San Francisco, and the power of friendship. It’s also a gorgeous, painful tribute to an American way of life that doesn’t exist anymore; finding moving beauty in a foreseeable tragedy, that will warm your heart.

The main take-away: Four walls don’t define a person’s worth.