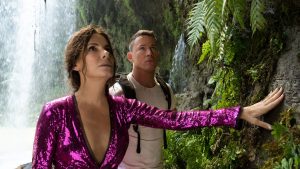 The 80s is known as the decade for outrageously fun romantic comedy adventures, such as “Romancing the Stone” and “Jewel of the Nile.” In recent years movies have become heavily dramatic, with emotionally injured characters presenting dreadful character arcs. Viewing “The Lost City” is the perfect respite and, personally, a much-needed uplifting break for this film critic. Truth be told, it’s the most fun I’ve had viewing a movie in a theater for years.

Sandra Bullock stars as Loretta Sage, a self-assured yet disheartened romance novelist who is a grieving widow. Channing Tatum stars as Alan, a sincere handsome cover model who is the hero of Loretta’s books. Alan struggles with his image as just a good-looker; he desires to prove to Loretta that he actually has the strength, brains, and wits to protect his imaginary leading lady from any harmful situation. When Loretta is kidnapped by a billionaire (Daniel Radcliffe), Alan embarks to rescue her.

From the get-go, we are plopped down into the jungle on a wild ride with a likely pair who are forced to work together to survive. With the help of Jack Trainer (Brad Pitt), a mysterious rescue specialist who adds to the comedy with his long wavy hair and outrageous antics. Clearly, a spin-off film should be in his future.
The directors are Adam Nee and Aaron Nee, who related how the script came about in a recent interview. “When we got a script from [screenwriter Dana Fox], and it’s amazing, and we brought Dana back to write with us, it was this escapist adventure that we had been longing for,” said Aaron.
“That idea, that inspiration, influenced our decision on how we were going to direct it and how we would make it. Which meant to bring that level of adventure, we needed to really go into the elements; we needed to really take our cast and throw them into the jungle and throw them into the water and do it for real.”

The bottom line, I’m way in; we need more comedy in this world, and what better way to achieve that than through viewing the Queen of Comedy, Sandra Bullock, or “Miss Congeniality” while munching on popcorn in a movie theater, and yes, Channing Tatum and Brad Pitt are always a plus.

I’m Sarah Knight Adamson, your national film and TV critic, be sure to watch the Academy Awards tomorrow night. And I’ll see you next week.