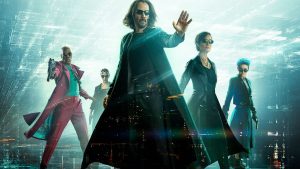 “The Matrix Resurrections” is the sequel to “The Matrix Revolutions” in 2003. It’s also the fourth movie in the Matrix franchise that started in 1999.

Keanu Reeves plays Neo, and Carrie-Ann Moss is Trinity; they reprise their roles from the previous films.
The setting is 60 years after the events of “The Matrix Revolutions,” we find Neo living an ordinary life as a video game creator. He begins to struggle with knowing the difference between his dreams and reality.
Neo begins sessions with a counselor to sort out his troubles. He asks, “Am I going crazy?” Neal Patrick Harris plays, The Analyst and says, “We don’t use that word in here.”

The co-writer and director, Lana Wachowski, has written and directed the series from the beginning with her sister, Lily, yet she goes solo this time. It’s been 18 years since Neo and Trinity sacrificed their lives in the finale of the Matrix trilogy; Lana wanted to explore another chapter to the story with Keanu Reeves and Carrie-Anne Moss—yes, they are back for another journey down the rabbit hole. Cue “White Rabbit” theme song. 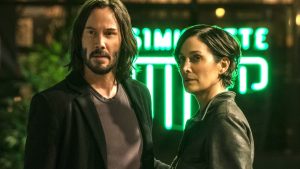 Lily teams up with “Cloud Atlas” author David Mitchell and screenwriter Aleksandar Hemon. Together they continue the pragmatic crises of man versus machine, Matrix versus reality, and blue pill versus a red pill. As sequels go, this one seemed perfect as Moss and Reeves are reunited.

The film’s first hour serves as a reminder of the events that led to Neo’s first awakening. Clips from the 1999 film are shown and serve as a reminder.

There is more humor here, which is appreciated, and the chemistry between Reeves and Moss is a sight to behold. Their romance is, as they say, ”one for the ages,” together, they lift every scene. They deliver an iconic couple who are fighting for a common goal.

I’d strongly suggest watching the first “Matrix” as it’s been over 20 years between the films. The great news is that I loved the new film. Seeing Neo and Trinity reunite is so exciting; their scenes are my favorites. Another reason to see the film is the spectacular special effects.

Thanks for listening in tonight, I’m Sarah Knight Adamson, your National Film and TV Critic for Sarah’s Backstage Pass, and I’ll see you next week.