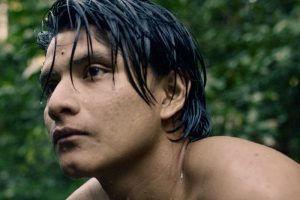 “The Territory” is an engaging documentary from National Geographic Films that sheds light on the Amazon Basin in Brazil, providing a never-before-first-hand look at the struggles of the Uru-eu-wau-wau indigenous people and their land. The exquisitely shot film delivers gorgeous cinematography of the rainforest and the people that make the forest their home. You’ll see them gather and hunt for food, and you’ll see them watching their adversary’s encroachment by using a drone camera.

Director Alex Pritz handed his cameras to members of the Uru-eu-wau-wau community to gain natural footage for the film—thus creating straightforward day-to-day activities, struggles, and insights. The topics of murder, deforestation, illegal land grabs, the impact of nature’s balance, and world climate change are all discussed. 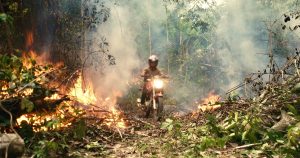 I’m very familiar with the global problem of deforestation and the illegal land grabs of indigenous land as I wrote a unit of study for my students and our school district in my former career in the early 90s as a school teacher and curriculum writer. This excellent documentary serves as an update to the problems of deforestation. It is the best I’ve seen so far as all sides of the story are explored, including film footage of the people illegally burning the rainforest, with an attitude that it is their right to do so.

Chronicling the Uru-eu-wau-wau settlement for three years, beginning with Brazil’s election of president, Jair Bolsonaro, a leader that turned the other way when indigenous peoples’ land was being taken or when a murder occurred of one of their tribe. A clear-cut view is given of the two factions, how Bolsonaro allows the Brazilian government not to enforce the strict environmental laws already in place to protect the rainforest and the marked indigenous land.

We meet the fierce Neidinha Bandeira, who grew up in the rainforest and has devoted many years of serving as an advocate for the Uru-eu-wau-wau’s way of life, though not being Indigenous. She’s a human rights activist and a comrade who helps with their cause. Gabriel Uchida, a Sao Paolo-born journalist and world photographer, connected director Pritz with Bandeira. The compassionate Neidinha tells the story of the Uru-eu-wau-wau community and arduously explains how the environmental laws are not being enforced.

Sergio, a middle-aged farmer, who has struggled as a farmer outside the Amazon, sees his opportunity of farming in the Amazon as a way of life. He’s the leader of the Association of Rio Bonito, maintains an openness to their rights. An unnamed person who’s a lawbreaker feels entitled to the land and tries to homestead on indigenous land. He explains how he and his fellow invaders feel entitled to the protected land and have no problem with rainforest deforestation due to their poverty levels and need for survival. They allow Pritz to film them as they burn the forest justifying their rights to the land even though it has been given to the Uru-eu-wau-wau community.

Dangers to the world’s environment are at risk when the rainforest is destroyed recklessly, “The Territory” documentary also teaches of these problems. We depend on medicines discovered by new species; when the rainforest is burned, those discoveries are also gone. Director Alex Pritz told me during our interview that another new species is discovered every two days.

Another important fact is that animal species need a certain amount of land to sustain living in the wild. A spider monkey needs 2,200 acres or 800 hectares to find all the food to support its survival. Global warming is a factor with the concerns that rising temperatures, drought, and deforestation are reducing the capacity of the world’s largest rainforest to absorb carbon dioxide from the atmosphere and help offset emissions from fossil-fuel burning. Recent studies have even suggested that some portions of the tropical landscape already may release more carbon than they store.

As one can surmise, the problems of the Amazon Basin do affect the world and our daily lives. “The Territory” presents a myriad of information with an up-close and personal look into the daily struggles of indigenous people, so much so that it’s hard to simply look away.