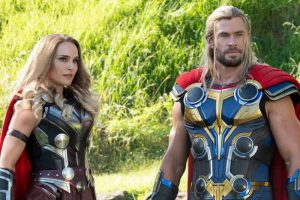 Taika Waititi’s “Thor: Love and Thunder” is a triumph to behold, staying true to the tongue-in-cheek humor with solid themes of love and family—it’s one of Marvel’s strongest films to date. Chris Hemsworth, Natalie Portman, and Tessa Thompson reprise their roles. The film opens as Gorr (Christian Bale), the villain in the movie, comforting his daughter. Soon we see her dying in his arms—Gorr vows to take vengeance on all gods, including Thor. Note to viewers, don’t miss the opening scene as it sets up the premise for the entire movie.

Meanwhile, Thor (Chris Hemsworth), the Viking Space god, is on a restoration journey. Korg (Waititi), his side-kick warrior, has a pile of rocks for a body with a delightful personality who serves as the story’s narrator. He says to Thor in an affirming statement, “hmm, dad bod to god bod,” Thor nods in agreement as he’s been working to lose his gut from “Avengers: Endgame.” They’ve settled on Earth with the people of Asgard into a port town named New Asgard, which has become a tourist attraction led by King Valkyrie (Tessa Thompson).

Watching Thor getting back into his ultra-world-saving bod makes for flashy moviemaking complemented by Guns N’ Roses blaring “Welcome to the Jungle.” The thrilling scene sets the tone for most of the movie Thor in full-on ax-wielding at supersonic speeds. By surprise, Thor receives a message from his ex-girlfriend Jane Foster, Natalie Portman, who now carries the Mjolnir. When in battle, she transforms into a 6-foot-tall, blonde, complete makeup superhero, donning a suit and cape similar in style to Thor. A superb move as her outfit is gender neutral, setting the stage for not one top superhero but two equally powerful heroes. Viewing the talented Portman in her superhero role is fascinating; she carries it to lofty heights, providing a role model for little girls of the world.

Mighty Thor, aka Jane Foster, is based on the writer-illustrator Jason Aaron Marvel comics that chronicle the character’s heroics. The story features a cancer-stricken Foster wielding Mjnior to keep cancer temporarily at bay. In the movie, she is front and center as her character is thoroughly developed with clear goals. Yes, she’s Thor’s former love interest, yet her superpower storyline sees Thor working alongside her. Aaron, in a recent interview, explained:
“I liked the idea of taking her, someone who had been around for Thor’s history as long as he had, but for the first time putting her at the center of that world—not as a love interest, not as a side-kick, but as Thor. She is not Lady Thor. She was not an offshoot. She was not second to the main guy. She was the main person. It was her look. It was her corner of the Marvel universe. And it was a huge thrill to explore all of that through her eyes.”

Perhaps this is the reason I liked this movie so much. The first time I saw the transformation of Jane Foster into Mighty Thor, a smile widened across my face. Yes, I said to myself after checking out every detail of Mighty Thor’s costume, I like this, I like this very much. Finally, gender-role equality—no frilly skirt here to be found. In fact, most wardrobe details are interchangeable except for her boots; a higher pointy heel is detected in some of the publicity photos.

Here’s some background information on Jane Foster. Her mother died of cancer when she was nine years old. Following this tragedy, her father, a plumber, worked two jobs to pay for her medical school, apparently exhausting himself and dying from complications from a heart attack. Science, her love, seems to be failing her now as chemotherapy is not helping fight her cancer. She knows the legends surrounding the Mjolnir, and its many powers, including good health. This is why she goes to New Asgard to find the broken pieces of Thor’s old hammer. Unfortunately, the more one uses the power of the Mjolnir, their health is weakened after use.

What about her powers? How do they compare to Thor’s? Mighty Thor displays incredible speed, stamina, and agility in the first sequence. She can dodge and flip through enemy lines and has Thor’s same physical strength and endurance. While holding Mjolnir, she has the power to fly. Although, as mentioned, it’s a double-edged sword, yes, she has renewed health while using the Mjolnir; when finished, it drains her health.

Yes, the nearly two-hour 50-minute runtime packs a lot in, although this critic relished our hero Jane Foster’s backstory. Returning to our villain Gorr dressed in white in a flowy chiffon dress similar to one worn in Ancient Greece, he’s a misfire. As the costume didn’t work for me, the original black cape and hood would have made more sense in portraying a true villain—after all, he does steal all the children of New Asgard, and they are also seen in cages. In the end, their scenes are overly dark and chaotic, probably for the best, as who wants to see kids in cages?

You will find witty sight gags throughout the film that lessens the tension, with actors finding hilarious ways to steal focus. Hemsworth is especially terrific as a god with a wounded ego who rises to the occasion, the chemistry with both Portman and Thompson is terrific. I also love their fierce women roles, who, by the way, don’t need him. Bale’s performance is spot-on. Although he’s rather solemn as the script mandates for his role, Russell Crowe is remarkably memorable in his role as the opulent Zeus. The key for me is the vital aspects of female empowerment, the kid-centered script, and the line Thor says, “There’s no greater purpose than to help others in need.”