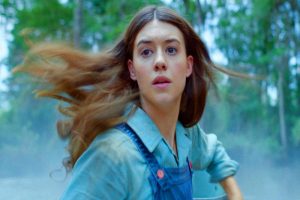 “Where the Crawdads Sing” movie is based on the bestselling book of the same name, written by Delia Owens, which has sold over 15 million copies since its release and is now in the top number one slot on Amazon as the highest-selling book to date. And what a page-turner of a book; it’s too bad the film doesn’t live up to the source material. Boring, at times, with a pieced-together script of confusing flashbacks, the movie doesn’t make the cut.

Kya (Daisy Edgar-Jones) is abandoned by her mother as a young child due to physical abuse by her father. Eventually, her siblings leave, and finally, her father hits the road as well. Kaya chooses to live alone in the North Carolina wetlands. Nicknamed the “Marsh Girl” of Barkly Cove, most townspeople shun her and make fun of her. When she attempts to attend school, they laugh at her reading skills and lack of shoes. 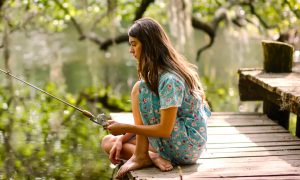 The movie begins with Kya being accused of murdering her falsehearted secret boyfriend. The trial is based on very little evidence, and David Strathairn, who plays her lawyer, presents a convincing case for her innocence. Unfolding in flashbacks, we meet two boys that befriend Kaya. The first one, as in the book, a shrimper’s son Tate (Taylor John Smith), has true intentions; he even teaches her to read and write; the other boy, the wealthy former High School quarterback Chase (Harris Dickinson), sees her only sex.

Unfortunately, the chemistry between Daisy and Taylor is sorely lacking, yes, he’s kind and teaches her to read in write and promises to marry her someday, yet the connection is rather blah. On the other hand, Daisy and Harris have a love-hate relationship that feels more true to life and realistic; their scenes are brutal to watch as the physical violence is over-the-top.

More details will ruin the story; therefore, I suggest waiting for streaming options instead of seeing it in a theater. The performance by The talented Daisy Edgar-Jones of (“Fresh”), which I viewed during the Sundance Film Festival, is excellent, as well as David Strathairn as her lawyer. The cinematography is gorgeous as well. The slow pace and undeveloped characters are other problems with the films. I was so hoping the film would be great given that I loved the book so much.