Being the Ricardos and Ghostbusters: Afterlife 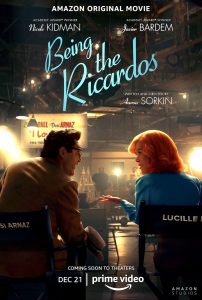 Hi Carl, and hello to all of our listeners out there. Tonight I’m going to review two films that are playing in theaters now.

First up, “Being the Ricardos” is a biographical drama. Written and directed by Academy Award winner Aaron Sorkin.

The film centers on the relationship between Lucille Ball, played by Nicole Kidman, and Desi Arnaz, played by Javier Bardem. William Frawley (J.K. Simmons), who played neighbor Fred Mertz, is Ball’s trusted confidante.
The film is marketed as taking place during a one-week period in the 1950s, although many other life events are also covered. 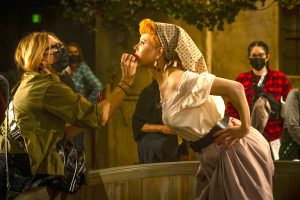 NICOLE KIDMAN on the set of BEING THE RICARDOS Photo: GLEN WILSON © AMAZON CONTENT SERVICES LLC

The transition to the black and white original “I Love Lucy” with the real-life Lucille Ball is a brilliant move.

We view the “I Love Lucy” rehearsals and Lucille Ball’s vocal input in every aspect of the show. Sorkin highlights her gift of comedy mixed with the stresses of dealing with a controlling husband.

I thoroughly enjoyed viewing “Being the Ricardos” as the performances are excellent by Kidman and Bardem. I also enjoyed Lucille Ball’s early work on her very successful radio show!

I’d say 3 and a half stars out of four. “Being the Richardos” is also streaming on Amazon. 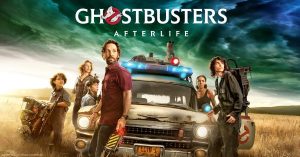 Next up: “Ghostbusters: Afterlife” rated it’s PG 13. This supernatural comedy film is directed by Jason Reitman, the son of Ivan Reitman, who directed the original “Ghostbusters” in 1984. It is the sequel to Ghostbusters.

The setting is 32 years after the events in Ghostbuster II, a single mom, Carrie Coon, and her two kids inherit a haunted ranch in Oklahoma.

The family-centered film is a love letter to Harold Ramis, and I enjoyed seeing Bill Murray, Dan Aykroyd, and Sigourney Weaver reunite in a fantastic scene.
3 stars out of 4.
Thanks for listening in tonight; I’m Sarah Knight Adamson, your National film and tv critic for SarahsBackstage Pass.