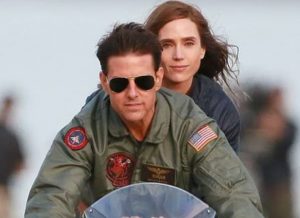 The generated hype for the long-awaited “Top Gun: Maverick” began with a ‘Global Premiere Red Carpet Fan Experience’ at the USS Midway Museum on May 4 in San Diego, California. The 250-foot Red Carpet commenced as Tom Cruise arrived via piloting a helicopter. Fans of the original “Top Gun” 1986 have waited 36 years for the sequel, released May 24. The Cannes Film Festival’s hype event featured eight French fighter jets zooming above the Palais as the smoke trial displayed the colors red, white, and blue before the premiere of the film in Cannes, France, on May 18. 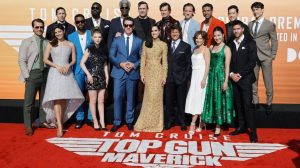 One might wonder, did all the grandiose hype live up to expectations? The answer is a hands-down yes! I screened the film in Chicago on May 17 and walked out with a huge smile and a four-star rating on my mind. The film is superior to the original as the script provides a deeper emotional connection to Tom Cruise’s character Maverick. Another bonus, Cruise insisted that no green screen or CGI aerial shots be used in the film.

The film’s main themes begin with Maverick struggling with the death of his best friend ‘Goose’ (Anthony Edwards), as he still feels guilty about his late wingman’s accidental death. His new assignment is to teach a young group of aviators to work as a team to embark on a secret mission—’Rooster’ Bradshaw (Miles Teller), the resentful son of Goose, is one of his students. There are also loose ends that need closure regarding a love interest at the air force base with Penny Benjamin (Jennifer Connelly), a local bar owner whose heart Maverick broke years ago. And of course, the breathtaking fighter pilot sequences, along with the push-pull of rebel Maverick with his superior officers, Senior Officer’ Cyclone’ (Jon Hamm), and Rear Admiral Chester “Hammer” (Ed Harris) as both detest his go-it-alone style. Hammer doesn’t like pilots, period. Known by the nom de plume of “Drone Ranger,” he wants to remove the human element entirely from the Navy’s aviation arsenal. He explains to Maverick: “Pilots need to eat, sleep. They disobey orders,” which is precisely the opposite of Maverick’s persona.

We know from the get-go of Maverick’s resistance to teaching the group, as he plainly says, “With all due respect, sir, I’m not a teacher. I just want to manage expectations.” Brilliantly, we see his insecurities; we are invested, rooting for the underdog, of which we also know a gifted individual in his field. Creating vulnerability in a character draws us into the story; it keeps us guessing as to his next moves.

The students include Rooster’s super-competitive teammates, the cocky Hangman (Glen Powell), Phoenix (Monica Barbaro), Coyote (Greg Tarzan Davis), Fanboy (Danny Ramirez), Payback (Jay Ellis), and geeky Bob (Lewis Pullman). The teasing amongst the group is great, and a typical line is directed at Bob, asking him what kind of nickname is that? Next, someone says, “Oh, I know what B, O, B stands for, ‘Baby on Board.’

Some may be wondering, does Val Kilmer make an appearance? The answer is yes. He’s now the ailing Admiral Tom’ Iceman’ Kazansky, who knows Maverick’s legendary unorthodox approach; he also knows he is the only person to pull off the mission. The flash-backs between Kilmer and Cruise are a great addition to the film, creating nostalgia.

The main highlight is the term “I feel the need for speed!” At which time fans know that the fighter jets will soon be zooming through the air. The realistic look of those scenes is incredible. Teller and the group spent three months in flight training. The close-up cockpit shots are taken during real-in-flight sequences; basically, all had cameras on during the flights.

The Bottom-Line: Director Joseph Kosinski, cinematographer Claudio Miranda, editor Eddie Hamilton and writers Ehren Kruger, Eric Warren Singer & Christopher McQuarrie have created an excellent stand-alone film that will become as classic as its original source material, “Top Gun.” The layered emotional elements added depth and texture to the familiar, beloved characters while paving the way for the next generation.