Clifford the Big Red Dog (PG), The Power of the Dog (R) 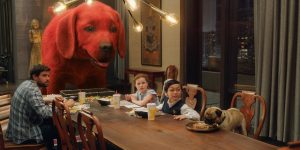 Hi Carl, and hello to all of our listeners out there tonight I will review two movies with the word dog in the title, yet they couldn’t be further apart!

First Up “Clifford the Big Red Dog” is a live-action movie based on the beloved Clifford the Big Red Dog books by Norman Bridwell. Fans of the books will be shocked at the quality of the film’s cinematography as this is live-action. Clifford has never ‘looked’ so real. Certainly not an easy feat to accomplish. The jokes do need a significant re-haul, and the story should have focused more on Emily Elizabeth, not the weird villain played by Tony Hale; note to screenwriter (aggressive sheep are not funny, and talking about sawing people in half doesn’t work in a children’s film), yet in the end the film has a big heart.

Yep, Clifford is enormous (about the size of an elephant), and he’s fire engine red! Emily Elizabeth, a 12-year-old, is played by Darby Camp, the director is Walt Becker, who brought us the “Alvin and the Chipmunks” movie. Emily’s single mom Maggie (Sienna Guillory), struggles to provide for herself and her daughter. Desiring a better education for her daughter, Emily attends an esteemed New York private school. Yes, they live in a lovely rent-controlled New York apartment, although they need food stamps to get by to make ends meet. Sadly, the smart and kind Emily Elizabeth is bullied at school. In this ” Clifford ” version, the breath of fresh air is Maggie’s fun-loving brother Casey (Jack Whitehall), who lives in his van.

As a former 2nd grade teacher, I used the Clifford books in my classroom to teach lessons regarding good deeds, kindness, empathy for others, and pet responsibility.
The books were well-worn and tattered as the kids couldn’t get enough of Clifford’s adventures. Personally, I’ve been looking forward to this movie in live-action form and am very impressed by the result. I can also breathe a sigh of relief that the filmmaker decided not to have Clifford speak.

The story begins with Uncle Casey, taking care of Emily Elizabeth while mom is out of town on a business trip. Showcasing New York’s lovely green spaces, they find themselves attending a magical carnival filled with exotic animals. Mr. Bridwell (John Cleese), is named after Clifford’s beloved author and creator, Norman Bridwell. His storyline parallels Oz from the “Wizard of Oz” books, as he’s magical with an ode to love and family. Emily Elizabeth is smitten after finding Clifford, the tiny red puppy, in a tent filled with a sloth, snake, and monkey. Uncle Casey is worried, the puppy is too small and might not survive. Also, what will his sister say about bringing a dog into an apartment with a strict ‘no pets allowed rule? At the end of their visit, Emily Elizabeth asks Mr. Bridwell if Clifford will grow. He replies, “Oh, he will grow…that will depend on how much you love him.”

The duo returns home without the red puppy, although Clifford does end up in their apartment and in Emily Elizabeth’s room for the evening. As in the trailer, we hear Emily whispering to Clifford in a sincere and caring tone. Yes, her wish is for her puppy to grow big, strong, and healthy—the following day is when all the shenanigans begin as Clifford has grown overnight into a big red dog. Of course, Clifford has trouble adjusting to his new size, and keeping him hidden is nearly impossible. The film’s strongest points shine when Clifford does his ‘good deeds’ as in the books. It’s just too bad there has to be a villain involved; this film could have delved deeper into family, friends, and kindness and still be a hit with kids.

In the end, the message of accepting differences is heard loud and clear, a redeemable choice in the movie. So cuddle up with your favorite pet or stuffy to enjoy a family-friendly film for all ages. Emily Elizabeth’s narrative is spot on, “Clifford doesn’t hurt anybody, he loves, and he’s easy to love back.”

“Clifford the Big Red Dog” is playing in theaters and streaming on Paramount +. 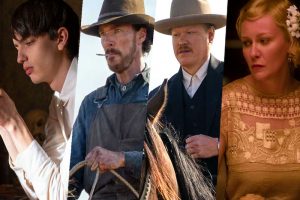 “The Power of the Dog” rated R this is director Jane Campion’s western-based in Montana, and you won’t see a tail-wagging dog in this film.

You will see character studies of two brothers (opposite in personalities), Benedick Cumberbatch and Jesse Plemons, a new wife, Kristen Dunst, and her son, a sensitive male college student, Kodi Smit-McPhee.

Here’s gorgeous cinematography set against the backdrop of a 1925 Montana Ranch.

The Power of the Dog is based on Thomas Savage’s 1967 novel. It tells the story set in the 1920s of a Montana ranch and two brothers different as night and day. Case in point, one bath, the other doesn’t. George, the bather, is neat and polite; he wears his Sunday-best suits and ties to oversee his ranching duties. Phil is rebellious, crude in manners, and dresses as if he’s been on a cattle-herding job for months. Oddly, the brothers share a room in the large ranch house and sleep together most nights. When George falls in love and marries Rose (Kirsten Dunst), the widowed owner of a tiny run-down hotel, Phil’s jealousy consumes their relationship.
If you’re in the mood for a slower pace, with themes of reflection, frustration, dependency, loneliness, and anger, this film is for you.

This is Jane Campion’s first film in 12 years. She’s known for her Award-winning Academy film, “The Piano.” It was great to meet see her in person at a press conference and to hear all of the cast and filmmakers dive deep into the film’s themes.