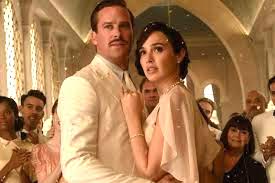 If you viewed Kenneth Branagh’s 2017 film, Murder on the Orient Express, you’ll have a good idea of the premise of Death on the Nile. The mystery thriller is based on the 1937 Agatha Christie novel, with Branagh returning as director and actor Hercule Poirot, the notorious Belgium detective, and his signature mustache. One may ask, is it worth a two-hour trip down the Nile River? The answer is yes, absolutely, as the diversity of intriguing characters, plots-twists, melancholy jazz music, breath-taking Egyptian ruins and let’s not forget the ever-talented Gal Gadot as a wealthy socialite are worth the cruise.

With Branagh at the helm, I was expecting a grand entrance introducing Gadot’s Linnet Ridgeway, the vampy heiress—needless to say, her sashaying and vivacious arrival surpassed my expectations. Known mainly for her Wonder Woman portrayals, seeing her in a carefree, spirited role is refreshing. The opening dance numbers are visually appealing while setting the scene for the 1930s.

Gadot’s character mesmerizes throughout the film, as less attention is given to her new husband, Simon Doyle, played by Armie Hammer, the elephant in the room or on the screen, as his real-life sexual assault and abuse accusations mar his character and his performance. I had a hard time watching him when he appears on screen, of which is often. The film’s opening was delayed because of the accusations, and talks of re-filming his character were debated. For myself, I decided not to let the scandal distract my appreciation of the film as a whole.

The plot moves quickly with multimillionaire Linnet and Simon honeymooning via a cruise down the Nile with a few invitees. Alas, Linnet confesses early on to Poirot, a last-minute guest, that she doesn’t feel safe with any of the guests as her money is a deterrent to trust. The forlorn look on Poirot’s face is priceless; during the exchange, he adds persnicketiness and humor to his role, which balances the heavy themes of murder and betrayal.

While aboard the ship, disembarkment occurs at various locations, with guests wandering through Egyptian ruins. The cinematography is stunningly beautiful; it’s up close and personal; I cherished the scene of Tom Bateman Poirot’s friend Bouc, flying a kite midway up a pyramid while his demanding mother, Annette Bening, Euphemia a famous painter, paints the scene of her son in action. It’s the perfect respite from cold temperatures, watching the blazing sun on the pyramids during the day and the evening moonlight glistening across the calm river at night while coatless guests take leisurely strolls. One negative is the lengthy build-up to the actual murder. However, Simon’s vengeful ex-fiancé Jacqueline de Bellefort, Emma Mackey, may not have been fully developed unless we viewed her jaded backstory.

Rounding out the cast of suspects is the alluring voice of jazz singer Sophie Okonedo, with a fierce Letitia Wright as her daughter, a disgruntled assistant Rose Leslie and an unscrupulous moneyman Ali Fazal. At the same time, Russell Brand is Linnet’s ex-fiancé, Linnet’s outspoken communist godmother Jennifer Saunders, who arrives with a nurse companion Dawn French. Of course, they all have viable motives.

Kenneth Branagh is on a roll with his ever-popular film Belfast and his follow-up film Death on the Nile, does not disappoint.

Studio 20th Century, Screenplay by Michael Green, based on the 1937 novel of the same name by Agatha Christie.