“Dolly Parton’s Christmas on the Square” and “Hillbilly Elegy” (R) 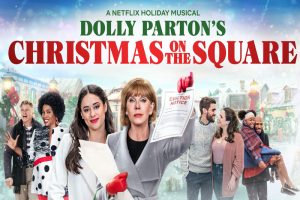 Hi Carl, tonight I’m going to talk about two movies that are streaming now on Netflix.

Just in time for the holidays, “Dolly Parton’s Christmas on the Square.” The film stars Dolly Parton as an angel who saves a town from eviction by showing a wealthy and mean woman, played by Christine Baranski, scenes from her past that were unknown to her. Similar to Ebenezer Scrooge in the storyline with several nods to traditional Christmas themes.

The film begins with a toe-tapping dazzling dance number with the entire town in perfect sync. The opening number introduces us to the cast, including a couple who owns a children’s clothing store and are trying to have a baby. We also meet a charming young girl helping her dad out at his bar. The characters are engaging and likable. Parton is clearly the star as she sings a touching song about a lamplighter in town.
While borrowing from seasonal classics like “It’s a Wonderful Life” and “A Christmas Carol,” set a familiar tone, although Dolly’s voice and lyrics are so worth the watch. The film seems fitting during these troubled times.
It’s directed by Debbie Allen and features 14 new songs by Dolly Parton. Jennifer Lewis and Treat Williams also star.

Clip “You find that light that can lead you to the part of you that is lost.”

The Bottom-line, I’m all in 4 stars out of 4. This is a beautiful movie with messages of love and forgiveness. Dolly’s angel wardrobe and songs are worth the view. Just know that you may shed a tear or two as there are secrets that are reveled and heartwarming moments. Check it out on Netflix streaming now. 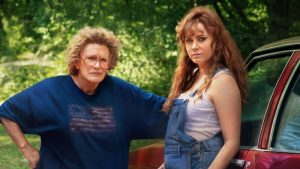 “Hillbilly Elegy” Rated R is based on the memoir by J. D. Vance. I read the book last year and have been waiting for the movie. It stars Amy Adams as Vance’s mother (Bev) and Glen Close as his Grandmother. We see the hardships of growing up poor, battling addictions, and verbal and physical abuse scars.

The backwoods stereotypes of rural Appalachia are reinforced in “Hillbilly Elegy,” contrary to the book’s intended message—that of family and learning from the mistakes of the past. Unfortunately, Oscar-winning director Ron Howard chooses to focus on a narrow portion of Vance’s coming-of-age story resulting in a script that elicits anger rather than sympathy.
J.D. (Gabriel Basso), a Yale law student, tries to break free from the poverty and hopelessness that defined his Kentucky childhood. “I came closer than any of them to something better,” he says in voice-over.” His supportive girlfriend (Frieda Pinto) tries to help, but she can’t stop the memories that keep flooding back when his druggy mom calls for help. He’s continually pulled back as his older sister (Haley Bennett) can’t handle the situation alone.

The numerous flashbacks become confusing while the editing suffers. A younger J.D. (Owen Asztalos) tries to navigate Bev’s downward spiral while finding a calming influence in his Mamaw (Glenn Close). Her words are frequently buried beneath insults and regrets from decades of abuse that have defined her family legacy. After all, she did set Grandpa on fire one night.
Bottom line, I’m out, 2 ½ stars out of 4. Unfortunately, the narrow script and depressing scenes don’t explain how Vance was able to break the cycle by merely graduating from Yale Law school. Not that I’m downplaying his achievement, we needed to see exactly how he had the strength to leave and pursue his dreams. Look for an Oscar nod for Glen Close.

This is Sarah Knight Adamson for Sarah’s Backstage Pass.com. Thanks for listening in tonight. I’ll See you next week.