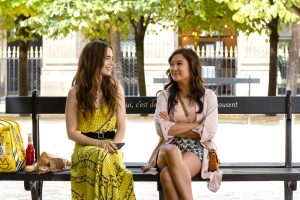 EMILY IN PARIS (L to R) LILY COLLINS as EMILY and ASHLEY PARK as MINDY CHEN in episode 101 of EMILY IN PARIS. Cr. CAROLE BETHUEL/NETFLIX © 2020

Hi Carl, tonight I’ll review a series and a movie that you can watch online: First Up, “Emily in Paris” a new series that is streaming on Netflix it stars Lilly Collins, yep that’s Phil Collin’s daughter, she’s Emily, an advertising intern who has just moved to Paris from the United States.

We see her adjusting to not only a new job, she’s also dealing with the added stress of working in a foreign country and she’s struggling with understanding the French language, and a boss who doesn’t want her there.

I screened all ten Episodes of this comical, lighthearted, romantic series and loved every minute of it. Lilly Collins’s portrayal is similar to Audrey Hepburn using all of her charm and wit. 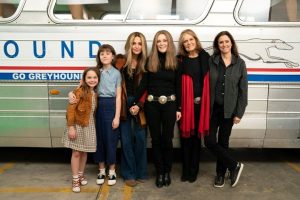 All four actresses that play the Glorias, Gloria Steimen and Julie Taymor

Next up: “The Glorias” it’s a movie streaming now on Amazon Prime.

It’s based on Gloria Steinem biography, “My Life on the Road.” What’s great about the film is the artsy director Julie Taymor, remember of the stage presentation of “The Lion King?”

Here we are given four Glorias, from childhood through adulthood, Julianne Moore and Alicia Vikander play the older Glorias.

Wow, what a refreshing in-depth view of a courageous woman, I loved this movie. Four stars out of four.

Thanks, so much for listening in tonight, as a reminder I’m in my 14 year as a film critic and a voting member of the Critics’ Choice Awards in LA. Check out my reviews on interviews on Sarah’s Backstage Pass.com. See you next week