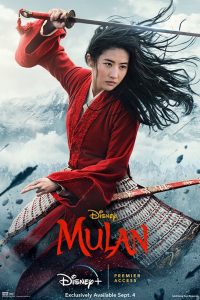 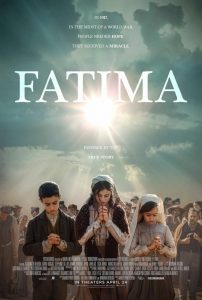 Hi, Carl, tonight I have two movies you can stream at home. Disney’s live-action movie “Mulan” and ‘Fatima” by Picturehouse. I want to remind everyone that I’m in my 14th year as a film critic and am a voting member of the Critics’ Choice Awards.

I’m happy also to tell you that I’ve been accepted as press to cover the Toronto International Film Festival this year. Stay tuned for updates!

First up, Mulan a stunningly gorgeous film about a girl who disguises herself as a boy to fight in the Emperor’s Army. Liu Yifei stars as Mulan, a brave, devoted daughter. Tzi Ma stars as her father.

I’m Way in four stars out of four. “Mulan” raises the bar in Disney sequels. This one is outstanding. The strong, gorgeous storyline for Mulan, the female character, sets a wonderful role model for all girls worldwide.

The setting is 1917, in Fátima, Portugal, where a miracle is said to have happened, an apparition of the Virgin Mary visited three small children. “Fatima” is based on true events during war-time in Portugal, according to those who witnessed the events—the children, their families, the villagers, and others who flocked to the town. Director Marco Pontecorvo beautifully and historically recreates the story with Picturehouse Studios as the film’s distributor.

Based on real-life events and starring Goran Višnjić (Beginners), Stephanie Gil (Terminator: Dark Fate) and Lúcia Moniz (Love, Actually), with Sônia Braga (Aquarius) and Harvey Keitel (The Piano, The Irishman), “Fatima” is just the type of film we need right now to strengthen the power of hope and faith.

“Fatima” is a gorgeous film with inccr4edible performances by all cast members. The beautiful, majestic voice of Andrea Bocelli sets a spiritual and haunting tone of the film. The original song, performed by Bocelli, ‘Gratia Plena’ means full of grace.

In my interviews with cast members, Goran Višnjić, who portrays the mayor of Fatima, sums up the film’s message, “When people ask me what the movie’s about, they want to know.” “So do you believe it? Do you believe in that miracle that really happened?” I’m like, “Well, this really doesn’t matter.” I mean, how are you going to dissect it scientifically? Let’s say we have a video of that day of the miracle. One person, “That’s CGI. That never happened.” This guy’s going to say, “Oh my God, it really happened.” When you start scientifically dissecting it, you lose faith. What I like to think is the message that these kids are putting up. It’s a message of love. The message is we need to love each other more, we need to pray more, and that’s the film’s message.

I’m way in four stars out of four, “Fatima” is the type of movie that gives us hope and the message of love. A beautiful film with an original song by Andrea Bocelli.

Check out my video interviews with all three stars Stephanie, Goran, and Lucia, on Sarah’s Backstage pass.com

See you next week.