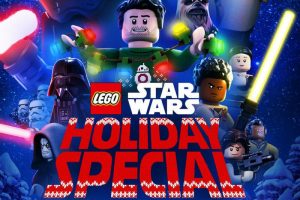 Hi Carl, tonight we have two films: First up streaming on Disney+ “LEGO Star Wars Holiday Special.” The film reunites Rey, Finn, Poe, Chewie, Rose, and the droids for a joyous feast celebrating Life Day.
Most Star Wars fans know the 1978 Star Wars holiday special as the worst installment of the franchise. Thankfully, the 2020 edition directed by Ken Cunningham is sweet, charming, and has just the right amount of sarcasm to right the wrong of over twenty years ago—and rightly so. Fans deserve a great holiday film, and now, I’m pleased to say—they have it.

Clip: “Was the night before Life Day in a Galaxy Far, Far, Away…”

The adventure begins with a magical crystal unearthed at a mysterious Jedi Temple, where Rey and Finn are hurled across critical moments in Star Wars history. Finn longs to become a better Jedi master to her apprentice Rey as they cross paths with the iconic heroes and villains from the Skywalker films.

The key question here—can the duo make it back in time for the fun festivities of Life Day?
Rey and BB-8’s festive yet humorous escapade dials in at 45 minutes, featuring ongoing jokes that are full of heart, garnering an excellent escape for families. Yes, family-friendly is the keyword here!
I’m way in 3½ Stars out of 4, finally, a Stars Wars holiday film that is great fun!

It’s great to see so many familiar characters as Rey explores the past and present of the Skywalker saga and the expanded universe—with the surprise addition of The Mandalorian and Baby Yoda.

Next up, The Prom stars Meryl Streep, Nicole Kidman, James Corden, Keegan-Michael Key, Andrew Rannells, and Kerry Washington. Four self-obsessed, fading Broadway theater performers decide to help a high school girl who wants to bring her girlfriend to the prom. They travel to a small conservative town in Indiana.

Clip:Let’s get this party started! Song…I’m going to take a stand…

Director Ryan Murphy’s adaption of the musical play that ran in New York City in 2018 is a fun, glitzy look into the theme of inclusion.
I’m in, three stars out of four and will say that I enjoyed James Corden’s performance as well as all of the cast, lavish sets, and costuming.

Thanks for listening in tonight. Again this is Sarah Knight Adamson; check out my website Sarah’s Backstage Pass.com; see you next week.