Military Wives and The Painter and the Thief 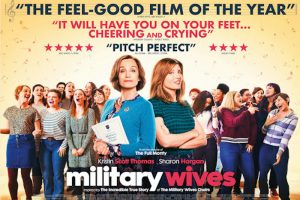 “Military Wives” is based on the inspiring true story of a group of women in England from different backgrounds who form a choir while their husbands are in serving in Afghanistan. Kristin Scott Thomas, Kate and Sharon Horgan, Lisa star in the film, and their personalities mix as well as oil and water. Kate is all no-nonsense, and Lisa’s a free-spirit who doesn’t like to take orders. They clash over how to direct the newly formed choir, with Kate trying formal (and dull) vocal training, while Lisa just wants the ladies to cut loose with some pop tunes.

Kate eventually gives in to the overwhelming groups’ desired songs and finds herself settling in. We also view grief as Kate is dealing with the death of her military son as she finds solace in her new group mid-way through the film. Mostly, we see Kate and Lisa duking it out over who will lead the group.

The director Peter Cattaneo (“The Full Monty”), garners a similar tone to that crowd-pleasing debut thanks to the interspersed comedy throughout. The big payoff is near the ending when the choir attends a singing competition at the Royal Albert Hall in London.

The Bottomline: I’m in 3 ★★★ stars out of four. A wonderful inspiring movie especially for the current pandemic we are all living! 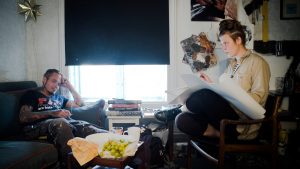 A still from The Painter and the Thief by Benjamin Ree, an official selection of the World Cinema Documentary Competition at the 2020 Sundance Film Festival. Courtesy of Sundance Institute | photo by Benjamin Ree.

Astonishing in tone and cinematic beauty, are words that describe Benjamin Ree’s documentary “The Painter and the Thief.” By use of “verité style,” (a genre of film, that emphasizes realism and naturalism), we view first-hand the stranger-than-fiction relationship between Czech artist Barbora Kysilkova and a junkie named Karl-Bertil Nordland who stole two of her large paintings.

We become privy to the notion what sometimes actually happens is more bizarre than anything that could have been imagined. Kysilkova had recently moved to Oslo, in hopes of making a new life for herself.
Covering a three-year journey, director Ree knew he wanted to direct a film about an art heist, and became interested when during the court trial when Kysilkova approached the thief, Nordland, and asked if he would agree to pose for a portrait.

The Bottom-line? I’m way in ★★★½ stars out of four. The story is based on empathy and compassion; it’s an artwork in itself as we view an artist at work. Truly a beautiful film.