Over the Moon and Holidate 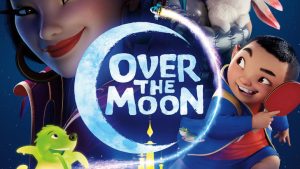 Hi Carl, I’ve got two movies tonight, and both are streaming on Netflix.

“Over the Moon” is an American-Chinese (computer-animated)
Fantasy directed by the acclaimed animator Glen Keane. He’s behind some of the most famous Disney characters—Ariel, Rapunzel, Aladdin, and Tarzan, in his first directorial debut.

This beautifully animated film centers on a young girl that builds a rocket to prove the fairytale her mother told as a child is actually real.

Fei Fei is voiced by Cathy Ang and believes a goddess is living on the moon longing for her lost love. The stellar cast, Phillipa Soo, Ken Jeong, Margaret Cho, Sandra Oh, and John Cho, lend their voices to bring the animation alive.

The setting is modern-day China in an imaginary kingdom complete with neon-lighted blobs and no laws of physics. Fei Fei’s build-up for her moonshot and the launch is the best part of the film. Her determination and strength shine through in fulfilling her dream. Eight original songs will delight all, including “On the Moon Above,” “Mooncakes,” “Rocket to the Moon,” “Ultraluminary,” “Hey Boy,” “Wonderful,” “Yours Forever,” and “Love Someone New.” They add to the tone and theme of the film—while incorporating traditional Chinese instruments are also a plus. The guzheng, a Chinese plucked string instrument, has a 2,500-year history. It used to have 16 (or more) strings and movable bridges–the modern guzheng usually has 21 strings and is 64 inches long. The pipa, another traditional instrument, is similar to a lute, a pear-shaped guitar with four strings while singing in Mandarin can also be heard.

The Bottom-line, I’m in 3 stars out of 4. The animation is both creative and colorful. We travel on a space adventure filled with touching family moments and has a soundtrack of catchy, memorable songs along with an adorable bunny and sweet little frog. 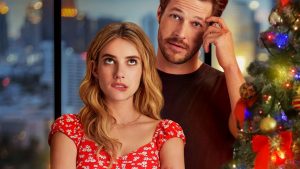 “Holidate” is a romantic comedy film directed by John Whitesell, it stars Emma Roberts as (Sloan) and Luke Bracey, as (Jackson). Sloane and Jackson are both single, and boy, do they hate the holidays! The Nosey family members and awkward dates on each holiday is a nightmare for them. Things do change when they decide to be each other’s dates for one year.

Yes, things do change, the snarky comments stop, yet the continued scenario becomes monotonous. What appears to be an appealing rom-com lacks heart and depth. The stars are likable, and Kristen Chenoweth, as the over-the-top aunt, is cute, the tone is flat.

The Bottom-line, I’m out, 2 ½ stars out of 4; what started as a clever storyline quickly turned into an onscreen groundhog day-situation. The characters became monotonous and somewhat dull. It’s too bad, as I do like both actors’ work. The script doesn’t go deep enough.

This is Sarah Knight Adamson, and I want to Thank you so much for listening in tonight. Please be sure to check out my website Sarah’s Backstage Pass.com, for my reviews and interviews.