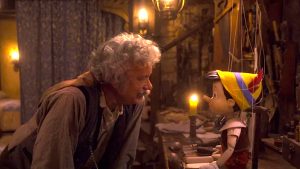 Hi Carl, and hello to all of our listeners out there. Tonight I’m going to talk about more films at the Toronto International Film Festival that has started and the Disney Movie Pinocchio.

First of all, here are a few more films I have tickets for in Toronto. Wow, Viola Davis’s film, “The Woman King,” looks incredible; it’s based on true events of the 19th Century when Women warriors defended Africa.

I’m also excited about “Empire of Light,” written and directed by Sam Mendes, it’s an ode to movie palaces and the power of film in storytelling. Olivia Coleman and Colin Firth star in a 1980s London setting.

Streaming now on Disney Plus is a new “Pinocchio” live-action movie with Tom Hanks as Geppetto, the woodcarver that builds Pinocchio. Academy Award® winner Robert Zemeckis directs this live-action and CGI retelling of the fable of a wooden puppet who has on a unique adventure to become a real boy. Pinocchio, played by (Benjamin Evan Ainsworth) gives a wonderful performance. Joseph Gordon-Levitt is Jiminy Cricket, who serves as Pinocchio’s guide as well as sometimes his “conscience”; Academy Award® nominee Cynthia Erivo is the Blue Fairy. Be sure to listen to the amazing song, “When You Wish Upon a Star.”

The Bottom-line: I enjoyed the movie, especially Jimmy Cricket and Pinocchio’s friendship; too bad Tom Hanks isn’t in the film very much. It is too scary for little children to watch; they should be at least eight or nine years of age. The whale scene dragged in parts, which took away from the film. Parents, please use your own discretion.

Thanks so much for listening in tonight; I’m Sarah Knight Adamson, your Film and TV critic for Sarah’s Backstage Pass. Be sure to check out all of my Toronto Film coverage. And I’ll see you next week on Hollywood 360 Network Radio.